Start Town staff: Cut Naranja Park and Path Spending
On October 9, Oro Valley Public Works Director Paul Keesler delivered bad news to the Council: Spending on the parks bond projects was going to be $18.2 million over budget. Keesler recommended specific cuts in spending. The counsel did not like what they heard so they asked Keesler to return to them with new recommendations.
Keesler returns tonight with a plan
Keesler will recommend relatively the same overall construct that he proposed a month ago: Slash spending on Narjanja Park amenities and on multi-use paths. We base this conclusion of our review of the “staff presentation” for tonight.
Slashing spending in these two areas is the only alternative unless the Council authorizes more funding from town reserves. The town has already spent the parks bond money that was planned for the golf course and the tennis, courts. So, there really isn’t any other place to cut spending. 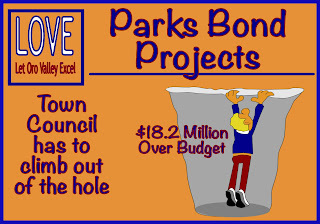 Reduce Naranja Park Spending by $12 million
Kessler’s plan reduces the scope of Naranja Park amenities:
After already spending about $1million to level an area to relocate the dog park to the north end of the park, Keesler recommends leaving it where it is, thus putting the skate and pump track elsewhere

Reduce multi-use path spending by $3.4 million
Keesler recommends deffering the “CDO to JDK path extension”. That is the only parks bond project from which those who live south of the CDO got any benefit. Staff was able to identify outside sources for another planned path, thus saving money,

Still a shortfall of $3.1 million
Even when all of these changes or implementing, they’ll still be sure fall of $3.1 million. Keesler is recommending that the council use available reserves and park impact fees to try to cover most of that.

Tonight Council will decide how to climb out of the hole
The Council faces ugly choices. Perhaps they will solve the problem by covering the full $18.2 million shortfall with general funds dollars. Or, maybe they will elect to make other changes. We don’t know.
We can tell you though that for 11 reasons we identified previously this Council, the former town manager, and town staff have put themselves in this hole and they’re going to have to figure out a way to get themselves out.