A disaster of their own making
We have identified eleven reasons why the spending for the park bond amenities got so far "out of wack" from reality. Most certainly, planning to spend $53 million when there is only $33 million available to spend is a disaster.
1.  Naranja Park costs a lot more to build than "guestimated"
As we detailed in our article Monday, the key spending problem is the anticipated cost of Naranja Park. That cost has doubled from what was "guestimated" in the Parks and Recreation Master Plan. It was that number, $17million, that the Council relied upon when the bonds were issued a year ago.
2.  No Naranja Park design in place to start
The Oro Valley Town Council agreed to move forward with the Naranja Park extension at a time when  there was no agreed upon design of what it was going to be. As a result, Council had no engineered cost estimate of what it would cost to build "it'.
3.  Council ignored experienced advice
The Council ignored the advice of the only person on Council who has ever built anything of any significant magnitude. Council Member Solomon told them that they were going about this the wrong way. First, you design. Then you raise the funds. The Council voted to do the process backwards.
4. Cheap borrowing cost came at a price... Pressure to spend and build now!... "Haste Makes Waste"
Council Member Nicolson championed the concept that the town must borrow now because interest rates were cheap. He was right. Rates are higher today than they were in May, 2021.
The price of borrowing was a commitment that 85% of the funds had to be spent within three years of the bond issuance. That is $21.25 million. That requirement put a "gun to the Council" to spend the money quickly.  It also meant that the town had to adopt a "construction manager is a risk" approach. This is a more costly process than the traditional building process. 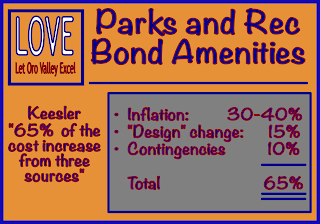 5. Inflation...shortages.. contingencies... design
According to Paul Keesler, Town of Oro Valley Director of Public Works, three items have worked together to increase cost 65%. [See panel right] The biggest culprit is an inflationary 30-40% increase in construction material cost. Timing has also hampered getting materials.
6. Naranja Park amenity scope creep
The scope of what is planned to be built has changed. The pump track is now an "all wheel space". The splash-pad is larger in size and includes shade sails, a ramada, and a bathroom. The cost of grading the land to which the dog park is being relocated is more than $1million.
7. Huge Naranja Park infrastructure cost of $11million
It is going to cost almost $11million to level the land and put in the utilities for the park. Certainly, someone should have known this when the original $17million total cost of the park was included as part of the Parks and Recreation Master Plan. Simply put: The cost of getting the land ready for the amenities was vastly more than guessed by the study's consultant.
8. Council never adopted the Parks and Recreation Master Plan
The Council decided not to approve the Parks and Recreation Master Plan. This is a 10 year plan. The plan was developed by a consulting firm. There was ample resident input. This plan included a statistically valid set of resident wants. Instead of approving the plan, the Council voted unanimously (Solomon absent) to instruct town staff to use it as a guide for future planning.  Thus, there was no plan in place and Council was free to do as it wished. Which it did!
9.  Pet Projects
It is not possible to piece together a coherent, financially sound plan based on the wants of Council members, each of whom have their own pet projects. The splash pad, golf course irrigation replacement, and the "pump track" are examples of special projects that one Council member wanted that really were not the priorities of the community. Trails, on the other hand, are a major stated desire of the residents as shown in the Master Plan Survey. Trail development, however, has taken a "back seat" to all these other projects.
10.  No early warning of outrageous cost
Keesler asserted at the Council meeting that the first time he had a glimpse of what it would cost to "do" Naranja Park was on September 23. That's when all the designs were (sort of) "complete." But, the cost of doing the grading was known some time earlier because it was an ongoing activity for many months and contracts have been in place.  Former Town Manager Jacobs should have reported to Council that site preparation was going to be far more than the consultant "guestimated".
11.  Locking in the use of the half of the half-percent sales tax for non golf purposes
The Council voted to apply one half of the half-percent community center/golf sales tax to non golf purposes. The noble goal was to let the 99% of the community who never use those facilities get some benefit from the tax. The town pledged this tax to pay back the Park Bonds. That's a 20 year commitment that can not be changed.
So...what can be done
It is now up to the Council do something.  They only need to build what they are legally required to do in the bond indenture: Spend 85% of the funds in the manner as noted in the bond indenture and continue to pledge the quarter percent sales tax to repay the bonds. Otherwise, they can do as they wish regarding what to build and when to build it.
Some of the amenity building on Naranja Park can be deferred to future years' spending.  As a minimum, the current plan for relocating the dog park... building pristine roads... adding all four new fields can wait.  The Council can defer building the trails but that would  punish residents who actually want to walk or bike to our parks without getting hit by a car on Oracle Road.
Tough Council decisions, decisions of their own making.
They need to fix the problem.
Whatever they decide, the vote needs to be unanimous. No more blaming each other. Partisanship has to go.
- - -