Parks Bond estimated spending far exceeds funding
Last week, for the first time almost a year, the Oro Valley Town Council got a glimpse of what it is really going to cost to build the projects funded by the $25 million parks bond. It was a real eye opener for them.
The news is so bad that it is hard to know where to start. Here's what the Council learned.
There's an $18.2 million shortfall [see panel].
Spending is estimated at more than $51.4 million to fund the five Park Bond areas. Funding sources, which include the Park Bond money, are $33.1 million. The shortfall is $18.2 million.
Spending on golf course irrigation replacement and tennis course replacement assured
Spending on golf course irrigation and tennis court replacement at the Community Center is well underway. These projects will be completed in November and December, respectively. Their total cost is $12 million. All but $900,000 has been contracted. These projects are going to be built. 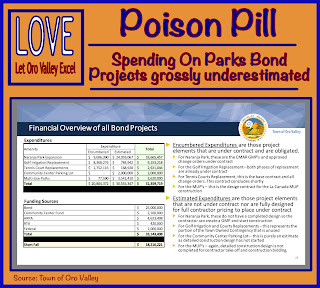 Naranja Park spending far more than "guestimated" by Parks and Recreation Study Consultant
The park that Council imagined when Council approved the bond is in jeopardy. The cost of that park has grown from a guestimated total spending of $17 million to an engineered estimated $33.7million.
Why the difference? According to Town Public Works Director Paul Keesler "The creation of the $17M estimate within the [Parks and Recreation Master Plan] study was completely generated by the consultant in 2018, using their historical data and their design assumptions. But at the end of the day, it’s only a study and actual engineering was not designed at that point."
Community Center Parking and Multi-Use Paths in jeopardy of not happening
The Parks Bond also included spending on the Community Center parking and some key additions to the town's multi-use system. Nothing has been done on these. Detailed construction design is not completed. It's anyone's guess as to what these will cost. 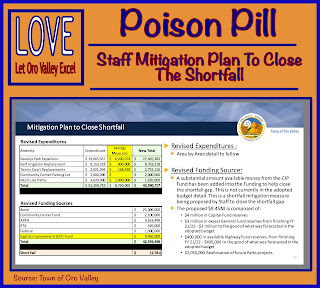 Town Staff recommends stripping back Naranja and cutting Multi-Use Path projects. Then, funding remaining shortfall through town's capital improvement funds
Staff recommended stripping back funding of $8.2 million from the Naranja Park Project and from the multi-use path projects. Then, they recommend using the $9.4 million from various town funds to cover the difference. The total of the two measures still results in a $2million shortfall [panel left]
Town Council requests revisit with staff
After a lengthy discussion, the Council asked staff to come back with more recommendations on what to do.
This rather simple request came after various Council members blamed various other council members, town staff, the economy and anything else they could think to blame for this problem. Frankly, there is plenty of blame to share.
- - -
Tomorrow: The Naranja Park Spending Disaster
Wednesday: Eleven Reasons For The Parks and Recreation Bond Project Spending Disaster
- - -
Some links that might be of interest
5/10/21 Parks Bond Resolution (Panel)
7/21/21 Park Bond Amenities (Panel)
11/15/ 21 LOVE article: Town of Oro Valley Embarks on Ambitious Parks Projects
11/17/21 LOVE article Naranja Park Buildout Presents Huge Challenge