Two measures: $43 million
The Oro Valley Town Council has passed two measures in the past month that, if approved in the 202-22 budget, will add $43 million in debt to the town. One is the previously reported issuance of $17million in debt to pay down the town's police pension (“PSPRS”) unfunded liability. The other is the incurrence of up to $25million in debt to finance what was to be a ten-year parks and recreation master plan.This is a plan that council has not publicly heard or approved.
“Pay as you go” is out… debt is in
Approval of bonding for the parks plan will abandon this council’s stated position to use “pay as you go” for parks and recreation facilities. This is the position the council affirmed last year when it approved a five year plan to reduce the annual subsidy of municipal golf to no more than $750,000 within five years. Currently, improvements to that facility as to all facilities was to be paid from current fund proceeds. This has been the town’s practice since its inception in 1974. 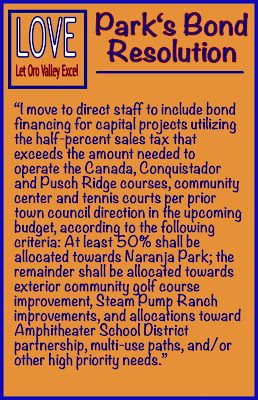 Cheap interest rates drive both debt decisions
One stated justification for doing this measure is the same was used for supporting the PSPRS debt: “Interest rates are cheap.” The town has estimated that it will be able to issue bonds with a less than 3% interest rate. They may well be able to do so as there is currently a dearth of new municipal bond issues in the market. But, this level of borrowing is a lot for a town of our size. It could reduce the town’s credit rating unless it pledges the sales tax money as collateral on the loan.
Recent reduced golf losses and increased sales tax revenues also drove decision to borrow to fund parks and recreation facilities
In addition to cheap interest rates, there was added rationale given for borrowing to fund the parks: Losses on municipal golf are down because the new golf operator has done a better job of operating the course than the last golf operator; and half-percent sales tax receipts are up. The council expects that both of these events will continue indefinitely.
Measure “shares the wealth” generated by the half-percent sales tax
The measure was proposed by Mayor Winfield and Vice Mayor Barrett. One of their stated objectives is to bring unity to the town by “sharing the wealth” through use of the half-percent golf sales tax. Barrett observed in her remarks during the meeting that the sales tax is paid by everyone and that, therefore, it should be used for the benefit of everyone. The language of the resolution (included in the panel above) does just that, proposing that bond funds be used to complete Naranja Park and improving other key parks facilities.  You can watch the Vice Mayor’s comments here.
Pending 2021-22 Budget Adoption
The bonding and the use of bond proceeds are included in the town’s tentative budget. Town residents will have the opportunity to opine on any item in the tentative budget in two upcoming town hearings. The bondings will happen in the late summer if they are included in the final budget.