Gephart: Oro Valley Is Financially Stronger Than It has Ever Been

Fiscal responsibility was an issue in last election
The four challengers in last summer’s Town of Oro Valley Mayor and Council contended that the incumbent candidates had been financially irresponsible in their four years in office. They had difficulty proving their assertion. Indeed, the facts, simply did not support reality.
Independent audit tells the story
Once a year, the town provides an independently audited report of its financial condition. It is called the Annual Comprehensive Financial Report (ACFR).  Last week, staff and town’s independent accounting firm, Baker Tilly LLP, presented this report to the town council. The report was for fiscal 2022, which ended in June. 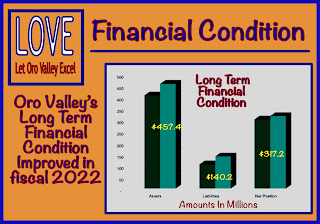 Providing a short-term and long-term perspective
The report differs from the financial reports that staff provides during the year in two ways. First, the monthly staff reports have not been audited by an independent third party. Second, the monthly staff reports provide information based on “cash in and cash out”. The ACFR, however, includes a report that matches revenues when they are earned with expenditures when they are incurred. These are called accrual-based statements. 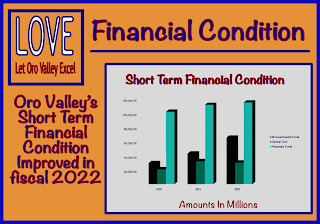 Oro Valley got stronger from both perspectives in 2022
Referring to the both types of financial reports, Gephart noted that “The town’s financial position is strong” on both counts. From a short term perspective, the town’s fund balances increased $22.5m in fiscal 2022. From a long term perspective the town increased its “net position” [assets minus liabilities] by $15million. Since 2018, the town has reported both an increase in its fund balances and an increase in its net position. This was not the case in fiscal 2017, the year before the incumbents began their first term in office.

Gephart: Town is well positioned financially
Gephart’s conclusion: “This town is stronger than it has ever been financially and it is well positioned to navigate a potential recession.”
Watch Gephart's remarks here. Our thanks to Take Back OV for that. Read their report on this here.
From time to time, we plan to post highlights of fiscal 2022. Stay tuned.