Council directs staff to spend ARPA restricted funds on existing projects….Violates ARPA spending rules?
This past Wednesday, the Oro Valley Town Council voted (6-1) to fund 2023 budgeted projects with $5.4 million in restricted ARPA funds. Staff had provided the council with a list of eligible projects. Council did not choose which projects to fund. Rather, they are leaving it up to town staff to select the funded projects.
Essentially, this directive by council adds to town cash reserves. The $5.4 million in ARPA funds replaces $5.4. in town funds that would have been spent on the budgeted projects. Increasing reserves of a town is an explicitly forbidden use of the ARPA funds.
Vistoso Trails Nature Preserve Master Plan community engagement
"The Town of Oro Valley is holding an open house on Wednesday, Jan. 25 for the community to review the Vistoso Trails Nature Preserve Master Plan Community Input Report. The open house, which will be 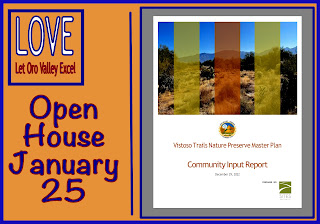 held in the newly restored Garage at Steam Pump Ranch (10901 N. Oracle Road) from 10 a.m. to 6 p.m., will allow community members to drop in at their convenience to review the data gathered from previous public engagement meetings, provide feedback and learn about the Master Planning process." (Source: Town of Oro Valley Media Release) You can review the report in advance of the meeting. "Those who cannot attend the Jan. 25 open house, can review the report and email comments to project's manager.
Head-on Crash on Oracle in December was caused by a reckless driver
There was lots of talk about the horrific accident at Oracle and Pusch View Lane last month. Here's the facts: "On the morning of December 16, an attempt to locate was dispatched, referencing a reckless driver in a black Chevy Silverado heading south on Oracle Road from Rancho Vistoso Boulevard at over 90 mph. An officer was on a traffic stop on Orace Road just north of La Reserve Drive when he observed the suspect vehicle drive by at an extremely high rate of speed, weaving through traffic and then passing vehicles on the shoulder of Oracle Road. The speeding truck then crossed into the northbound lanes of traffic while still heading south where a head-on collision occurred in front of the Target shopping plaza with a maroon Chevy Silverado driven by the victim. The drivers of both vehicles were declared deceased on scene and no other passengers were in either vehicle. The drivers both had to be extricated from each vehicle due to the excessive amount of front end damage to both trucks." (Source: Town of Oro Valley Town Manager Executive Report, January 2023) 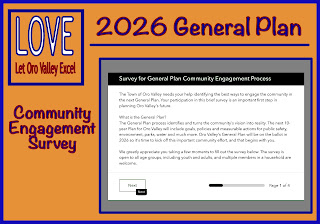 Take the 2026 General Plan Survey
The Town of Oro Valley invites residents of all ages to participate in a brief survey to identify the best ways to engage the community as the Town prepares for the next General Plan, which will be on the ballot in 2026. The survey, which is open now through January 26, can be taken by multiple members of the household.
Chamber Business Summit is January 26
The Greater Oro Valley Chamber of Commerce is hosting a "Business Summit" On January 26 at the Westward Look Resort & Spa.  Registration starts are 8am with sessions beginning at 9am and ending at 2:00 p.m.. Tickets are  $50. There will be breakout sessions on Financial Sustainability, Vision Boarding, Marketing, and Leadership. "Not only will Oro Valley Mayor Joe Winfield address the group at a delicious luncheon on the Sonoran Rooftop Terrace, but you’ll also hear from keynote speaker retired Major General Ted Maxwell of the Southern Arizona Leadership Council. It’ll be a great day for business owners, managers, and front-line staff. All of this for only $50, and that includes a 3-course lunch!" (Source)
LaPosada at Pusch Ridge is back
You may have noticed that construction activity is back for LaPosada at Pusch Ridge. It is located behind Home Depot. La Posada at Pusch Ridge. "The former Nakoma Sky development has re-broken ground as the La Posada at Pusch Ridge development located at Lambert Lane and First Avenue. Previous activities as part of the Nakoma Sky development included the Cañada Del Oro Wash soil cement bank protection, Federal Emergency Management Agency Letter of Map Revision and general site grading. The current activities for the La Posada at Pusch Ridge development include cutting in access roadways, setting up stormwater pollution prevention best management practice elements, and site mobilization. " (Source: Town of Oro Valley Town Manager Executive Report, January 2023)