Almost unanimous approval
This past Thursday, the Oro Valley Town Council approved two measures that enable the revisioning of the Oro Valley Marketplace into the Oro Valley Village Center. Once completed the developer, Town West, estimates that the project will bring $47.4 million in annual wages to the community.
The Council approved (6-1 vote) the massive two hotel, three apartment project. They approved a revised set of conditions (panel below right) presented by the applicant with a few exceptions.
Entertainment District Hotel is not going to happen… Apartments instead
There will be no hotel in the Entertainment District. This is something Mayor Winfield wanted. Speaking to counsel, Town West representative Keri Silyn reiterated what Town West told the Council at the prior session: There is no hotelier interested in building a hotel in the Entertainment District. 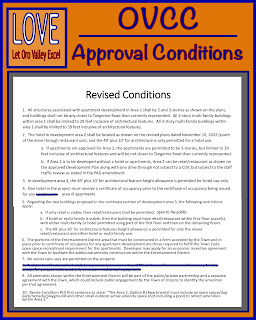 What there will be is a four story apartment building. That building will have retail on the first level and then three levels of apartments.
That apartment building will require the full expansion of the entertainment center to that which is proposed currently. That is, the open drainage area will need to be buried to create recreational space. This will have to happen because town code requires that a specific quantity of open recreational space per apartment unit.

Private:Public Partnership to be developed
The council did not create or approve a private public partnership agreement. This is known as an economic development agreement. The approved motion specifically states that the amenities which are shown currently in the Entertainment District will have to be part of the separate agreement with the town.
The town is not obligated, according to attorney Rothschild, to make any such agreement. If this agreement doesn’t take place, then the developer will have to incu the cost to create enough open recreational space to meet town code. That is: Space that is functionally usable. For example, it could be open desert walking space with benches and ramadas.

Town land sale to be transacted
There will also be a land sale from the town to the developer. These 2 1/2 acres of land on the west side of the Oro Valley marketplace. This land sale has not been discussed in public by the Council. LOVE identified it well over a year ago. We do not know the fair market value of that land. Sales of land or other properties must be approved by the a vote of the public if the market value is over a specified amount. We believe this is $1 million in value.
Council involvement made some difference
If councilmember Steve Solomon had his way this project would have been approved a long time ago. It would have been approved exactly as the developer proposed: Sixty-foot high buildings that are barely set back from Tangerine or Oracle.

Solomon’s philosophy, which he espoused a number of times during the hearings and discussions on OVVC, is that  “the developer is willing to invest millions of millions of dollars in Oro Valley. They are the experts. They most certainly know best. We should not question them.”

The Council did question them. They did so for over a year. The result is that the buildings will be about 40 feet high (some a bit higher because of architectural features). The buildings will be properly set back from the roadways. They will be less visible.
But, when all is said and done, the developer got what they wanted
OVVC is a mini-city.  It is the highest density residential project ever approved in Oro Valley.: 500 apartment units in two or perhaps three buildings.
This is most certainly not what is envisioned in the General Plan or by the founders of our town. Perhaps that is why Councilmember Bohen, recognizing this, voted “no” last Thursday.
Bohen looked past the glitter and promises and looked at the project for what it is.
---