Device will be installed this summer
Last week, the Oro Valley Town Council approved the installation of a HAWK traffic control system at Ironwood Ridge High School. Students will be able to cross Naranja Drive safely starting with the fall semester.
Council overrides staff recommendation
The decision of the Council to move forward with this overrode the recommendation of town Public Works Director Paul Keesler. Keesler did not believe that there would be use sufficient to warrant requiring the system.

Keesler based his conclusion on standards published by the US Federal Highway Administration. "The Manual on Uniform Traffic Control Devices for Streets and Highways (MUTCD) defines the standards used by road managers nationwide to install and maintain traffic control devices on all public streets, highways, bikeways, and private roads open to public travel."  Keesler said that an average of 20 students per hour needed cross in a one-hour period. His team observed the intersection on several occasions in late April and identified not more than a maximum use of 14 people.
Keesler's strident assertion that the standards of the MUTCD must be met in this case is in stark contrast to the implementation of a traffic light at the Community Center and La Canada Drive. There was no study done to determine the need for that traffic light. Town staff justified that light on the basis that there was a "line of sight" problem and that a traffic light was necessary. 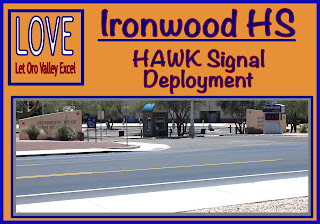 Council Member Solomon brought the issue to town council
Council Member Solomon presented the motion to move forward with HAWK approval.  Solomon said that he had been contacted by residents. We do not know if he discussed this with town staff. Rather, he chose to discuss it with former Police Chief Danny Sharp. According to Solomon, Sharp chairs the Highway Safety Committee of the International Association of Chiefs of Police. Sharp is also a candidate for mayor. Sharp told Solomon that a HAWK system was the most appropriate solution.
Barrett... Jacobs.. Keesler say they have been "working on this for some time"
According to Vice Mayor Barrett, speaking at the same meeting, this is not a new item. The town has been aware of the need to consider a traffic control device at the school since students returned to school last August after the pandemic.  According to Town Manager Jacobs: "We have been working very closely with the neighborhoods and the police" in this regard.  According to Keesler: "We've been working on this for quite some time."
... with no results
Regardless of alleged good intentions, the issue did not become important enough to investigate in detail until this April when Keesler did a survey to determine the actual potential HAWK usage.  That's when he did his surveys of potential use.
Town Manager asserts that she budgeted for the signal but...
The Town Manager stated (1.34:38 at the meeting) that she included funding in the 2023 Town Manager Recommended Budget Capital for the signal. Her statement is true but it is misleading.
The Town has not allocated any of its own funds for the signal. The $400,000 for the signal is a line item in the Regional Transportation Authority and Pima Association of Governments ("RTA/PAG") This means that the Town must apply for the money and then RTA/PAG must approve the money to come out of their funds. There is no guarantee that they will approve it.  In addition, Keesler would need to approve the warrant for the signal.
Council approval settles the issue and funds project
By approving the HAWK system at last week’s meeting, the Council said that it’s time to get this done regardless of what is Mr. Keesler or Ms. Jacobs thinks.
What else is being overlooked by town staff?
The decision to move ahead with HAWK does make one wonder. Why did Council Member Solomon have to put this on the agenda to prompt town staff to do something now? Isn't student safety of paramount importance? Why was the decision allowed to languish in a "bureaucratic" state?

This is the second item that Solomon has put on the agenda that appears to have been overlooked by town staff. The other is the discussion about improving mobility access at the community center. It was the action of Solomon that brought this to the forefront so that the Council acted to do something now. We wonder what would’ve happened if he had not made this a centerpiece of discussion?
- - -
Note: Ironwood High School sits on a Naranja Drive, east of Shannon Road. It was opened in 2001. In recent years, medium density housing has been built around it, creating the need for some sort of crossing traffic control. Resident Jeff Taylor lives in the area. Yelling a council at the meeting, Taylor said that he has been after the town to do something for the past 18 months. Taylor did not live in Oro Valley prior to that. The schools were closed for much of that time due to the pandemic. They opened last August.

Email ThisBlogThis!Share to TwitterShare to FacebookShare to Pinterest
Labels: Ironwood Ridge, Mary Jacobs, Paul Keesler, Traffic Control, Vice-Mayor Barrett
Newer Post Older Post Home
Our Weather
Oro Valley Quick Facts
• Population: 47.070
• Population per square mile: 1,154
• Median Household Income: $83,341
• Median Home Value: $311,800
• Median Gross Rent: $1,237
• Persons over 65: 31.8%
• Persons under 18: 16.3%
• Total Area: 36 Square Miles
Source
Join Our Mailing List
Disclaimer
We are not responsible for the guest views or comments of others.
Disclaimer of Email
The email address, "letorovalleyexcel@gmail.com" is not ours. The individual using that email identifies as "Richard Cranuim." This individual and this email address are not affiliated with LOVE in any way. We have blocked the address from our mail program and would suggest you do the same.