Bring Back That Small Town Feeling

We need a kinder, more gentle town, a town in which town staff acts as though they are our neighbor and not our enemy
---
A traffic light with no studied justification
Former council member and LOVE "Bulldog" Mike Zinkin has angst about the traffic light at the intersection of the "Community Center" and La Canada.  He has angst because the light inconveniences thousands of travelers who use La Canada daily; and because the traffic light was put there without any required study on the part of the town.

A traffic study ("traffic warrant analysis") is required to justify if a light is needed. The town did no such study. Instead, town staff decided to spend $500,000 (of RTA Funds) to put in this giant inconvenience. 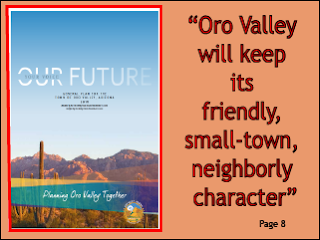 Town staff's justification for not doing the study is that the traffic light mitigates...


"...a serious safety issue caused by the deficient line of sight for vehicles turning northbound left. As previously explained, the present safety issue supersedes the traditional warrant analysis. Hence the necessity of the installation of the vehicular traffic signal." (Source: Email from Town Employee Jessica Hynd to Zinkin: 10/2/18)

The town's response is laughable. The country club has been in this location forever without a traffic light. The entrance to the country club is used less now than it was during its heyday. Yet, earlier this year, town staff decided there was a serious traffic safety issue, an issue so serious that they bypassed standard procedure for traffic light approval.  It does not matter to them that their "solution" inconveniences the 21,000 daily vehicle trips passing that light daily. Or that they spent $100,000 on it.

An herbicide spray with no sign
Several weeks ago we wrote about the town spraying a Roundup type product on the grass at Kreigh Park. The spray cause a great deal of angst for those who use the park since they didn't know what was. A sign to tell them what product was would've been helpful. One of our readers asked the Town why a caution sign was not posted after the spraying. Below is the response the reader received.


"The Town uses products that contain glyphosate to control weeds in our right-a-ways and parks. Our community’s safety is important and we continue to stay up to date with the US Environmental Protection Agency’s (EPA) regulations and any updates or changes that may occur. We will continue our current process for spraying until such updates are passed along by the EPA."

In other words, the town needs to have the EPA tell it when it should post a notice to let people know that something potentially hazardous to children and pets was on the grass. Apparently, town staff needs federal approval to use common sense.

Fill out a form at your peril
This is not the story of the responses of one town employee. Those responses are merely an example of how the town views its real customer, the town resident.

There is no more clear an example of demonstrated indifference of town staff to the residents of the community than the 2015 community center vote petition. The petition was rejected by the town clerk on technical grounds. The town clerk stood by and allowed thousands of signatures to be gathered and then ignored, by not telling the petitioner what number needed to be on the back of the petition. The clerk said it wasn't her job to tell people how to properly fill out the form.

Whose job is it? Gee. What else does the clerk do all day?

The Oro Valley "Iron Curtain of Silence"
We saw an enormous change  in the approach of town staff to the residents during the years the Majority-4 was in power. Then town manager Greg Caton built an "Iron Curtain of Silence" between the residents and the town. He built barriers of communication so that residents are stuck getting answers from one person who, in our opinion, does not understand the questions and often gives flippant or incomplete answers.  Town Manager Jacobs has maintained the barrier.

The "Iron Curtain" is so strong that the town employees fear talking with residents.

One resident asked one of the people who works at Kreigh Park what the substance was that was sprayed on the grass. The response: "We're not allowed to discuss this."

Email ThisBlogThis!Share to TwitterShare to FacebookShare to Pinterest
Labels: Small Town Feeling, Town Employees
Newer Post Older Post Home
Our Weather
Oro Valley Quick Facts
• Population: 47.070
• Population per square mile: 1,154
• Median Household Income: $83,341
• Median Home Value: $311,800
• Median Gross Rent: $1,237
• Persons over 65: 31.8%
• Persons under 18: 16.3%
• Total Area: 36 Square Miles
Source
Join Our Mailing List
Disclaimer
We are not responsible for the guest views or comments of others.
Disclaimer of Email
The email address, "letorovalleyexcel@gmail.com" is not ours. The individual using that email identifies as "Richard Cranuim." This individual and this email address are not affiliated with LOVE in any way. We have blocked the address from our mail program and would suggest you do the same.