All data points point down
We wish we could present a more encouraging report on what's happening with CAP water. But we can't; certainly not after listening to Tom Buschazke, Director of the the Arizona Department of Water Resources (ADWR) at last week's briefing. "All the trending of the data points to a need for us to take serious action."
What happens to CAP water matters to Oro Valley because the town uses it to replenish the groundwater supply. This replenishment makes Oro Valley's water supply sustainable. 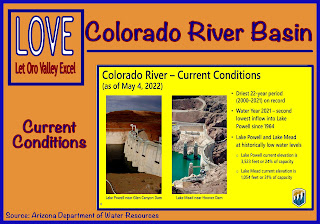 Lake Powell is at its lowest level since it was filled. This fall, it is possible that the system will rely on an untested alternative method of delivering water downstream to Lake Mead. The water level in Lake Powell will be so low that there won't be enough water to flow over the dam. Even if that alternative method is successful, it is likely that it will lack the capacity to meet water inflow needs of Lake Mead.
Therefore... Lake Mead, the source of CAP water, is at historical low levels... more action needed
The news on Lake Mead was equally discouraging. Lake Mead sits at 31% of total capacity. In fact, it is so low that barrels and dead bodies being discovered in the dry lake bed. The expectation is that further significant actions are going to be needed to reduce water use. Large reductions in use could be required in the by 2024. We will feel it here in Oro Valley. Lake Mead’s projected water level possibly will trigger a Level 2 shortage by year end.
A four-fold problem
The problem is a combination of a 22 year historic drought (“We’re being piled on by mother nature”), over allocation of water among the states that draw from Lake Mead, extensive growth in population, and user conservation that simply is not sufficient to make up the a huge difference between demand and supply. 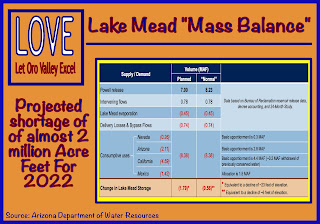 Statewide, Arizona trying to make a "dent" in CAP water consumption
ADWR contends that statewide CAP water consumption will be reduced by almost 812,000 acre-feet this year. This is the result of a several actions. One is the Tier 1 reductions in usage. This took water allocated to farming. Another is a State program ("500 + Plan") for voluntary consumption reduction. Part of this plan has had cities in the Phoenix area reduce consumption by 35,000 acre feet.
"Significant action needed to avoid a crisis"
Even with all of these efforts, Lake Mead was projected to decrease in elevation by 23 feet as of the end of this year. [panel above left] That is significant.”Even with the actions being taken in the lower basin, the result is a significant difference between supply and demand. These numbers might be relatively alarming to some…. but it is merely to point out that we need to take significant action moving forward to avoid a crisis.” Fortunately, there is no imminent threat to water inside our homes, according to ADWR Director Buschazke.
- - -
Note: Both Lake Powell (Glen Canyon Dam) and Lake Mead (Hoover Dam) have hydroelectric power plants. The operation of both of these power plants is threatened by the low water levels. "The hydroelectric power generated by the [Hoover] dam is allocated between the states of Nevada, Arizona, ten cities in Southern California, the Metropolitan Water District of Southern California and Southern California Edison Company. The latter two and the city of Los Angeles account for nearly half of the electric power received."(Source)

Email ThisBlogThis!Share to TwitterShare to FacebookShare to Pinterest
Labels: ADWR, CAP Water, Lake Mead, Lake Powell
Newer Post Older Post Home
Our Weather
Oro Valley Quick Facts
• Population: 47.070
• Population per square mile: 1,154
• Median Household Income: $83,341
• Median Home Value: $311,800
• Median Gross Rent: $1,237
• Persons over 65: 31.8%
• Persons under 18: 16.3%
• Total Area: 36 Square Miles
Source
Join Our Mailing List
Disclaimer
We are not responsible for the guest views or comments of others.
Disclaimer of Email
The email address, "letorovalleyexcel@gmail.com" is not ours. The individual using that email identifies as "Richard Cranuim." This individual and this email address are not affiliated with LOVE in any way. We have blocked the address from our mail program and would suggest you do the same.