Some Relief... But No Solution To The CAP Water Problem

Cesare: We're working diligently to address the problem
Yesterday, we wrote about the dreadful Colorado River Basin situation and its importance to the town of Oro Valley. What we did not report is what’s being done to “work the problem.”
We communicated with Karen Cesare, CAWCD Board Member Representing Pima County. Cesare updated the Oro Valley town Council last November on Water.

Cesare wrote to us: “You’re right in that things within the Colorado River Basin are still getting worse not better - and what I want people to know is that everyone involved, in Arizona, the Lower Basin States and the Upper Basin States, along with the Bureau of Reclamation, is working diligently and cooperatively to address rapidly changing scenarios in real time. The recent Drought Response Operations Plan (aka DROA) is an example of this cooperation.”

Some relief to Lake Powell
In April, the representatives of the seven states that use CAP water sent a letter to US Department of Interior Assistant Secretary Trujillo. The letter is “legalese” in its structure. Essentially, the letter confirms the commitment of the seven states to work cooperatively during this crisis. 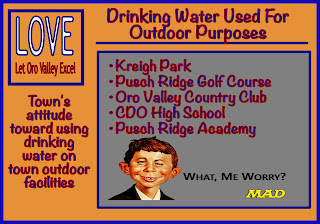 The letter also confirms that the bureau will release 500,000 acre-feet of water from one of the reservoirs that fees Lake Powell. This measures come on top of emergency releases last year from Flaming Gorge and two other upstream reservoirs, totaling 161,000 acre-feet. Will allow the electric turbines that Glen Canyon Dam to continue to operate.
Pray for an end to the drought
All of these efforts continue. Of course, there is the hope that the drought will end soon and normalcy will be restored. There's also the prediction for another active monsoon season here in Arizona. Unfortunately, much of that "runs off" but let's capture as much as we can!
Opinion: Time for Town of Oro Valley to budget to reduce outdoor drinking water use in it's facilities and more by converting use to reclaimed water
All of this points to the need for the Town of Oro Valley to step up and take action regarding its wasting drinking water on two outdoor facilities: Pusch Ridge Golf Course and Kreigh Park. We're not talking about closing them. We're talking about using reclaimed water instead.
And, while the town is at it, why not negotiate with well-water users, like the Oro Valley Country Club, to get them into the town's reclaimed water system. It's in the same area.  As is CDO high school and Pusch Ridge Christian Academy. All use drinking water.
- - -

Newer Post Older Post Home
Subscribe to: Post Comments (Atom)
Our Weather
Oro Valley Quick Facts
• Population: 47.070
• Population per square mile: 1,154
• Median Household Income: $83,341
• Median Home Value: $311,800
• Median Gross Rent: $1,237
• Persons over 65: 31.8%
• Persons under 18: 16.3%
• Total Area: 36 Square Miles
Source
Join Our Mailing List
Disclaimer
We are not responsible for the guest views or comments of others.
Disclaimer of Email
The email address, "letorovalleyexcel@gmail.com" is not ours. The individual using that email identifies as "Richard Cranuim." This individual and this email address are not affiliated with LOVE in any way. We have blocked the address from our mail program and would suggest you do the same.