The "Oasis Park Entertainment Center" is essential to the proposed center
The centerpiece of the proposed Oro Valley Village Center is a strip of land between the Walmart and the Century Movie Theatre in the Oro Valley Marketplace. The strip continues past The Keg restaurant and ends at the main roadway to the west of the Olive Garden. [see panel below-right]
Developer seeks zoning change...
The Entertainment Center can only be built on the site if the land is zoned for "recreational open space." The land is zoned as natural open space.  It is a for drainage.  The plan is to install a culvert for water transport to Big Wash. The strip would be filled to do this. 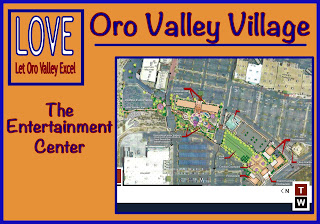 ...and an "extended" interpretation of required recreational space regulations
Oro Valley zoning codes require that apartments must have land set aside for recreation.  "As staff notes in the staff report, a typical garden apartment needs about 15 acres for 300 units. Neither the proposed Tangerine site nor the proposed Oracle site satisfies these requirements on their own.  The Tangerine site is 12 acres and the Oracle site 7 acres," according to Town West attorney Keri Silvyn, speaking at last week's Planning and Zoning Commission public hearing.
The apartment sites, on their own, are not sufficiently large to allow for both the apartment building footprint and the required recreational space.  Thus, Town West, the project developer, is requesting that entertainment district amenities be used to fulfill some of the recreation land requirements. They need to build 730 apartments in order to provide the population density that would make the Oro Valley Village Center financially feasible.
The Entertainment Center is a "Multi-faceted recreation space"
"There’s space to play and enjoy events, Silvyn noted at last week's meeting. "It's a cultural area. There’s a lot of different activities that can take place on there. We worked with the town to design the flexible space on the north. You could do things like the ice-skating rinks. For those of you who’ve been in downtown Tucson, they do that during the holidays. This would also be a purposeful place to put the Christmas tree maybe with the ice rink so that people want to be there. There’s gazebos nearby. There’ll still be some other open space and it’s all connected." 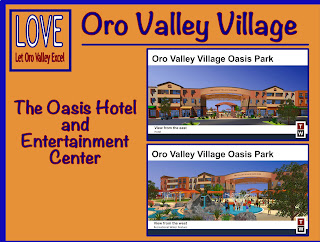 It is next to the site of one of the hotels
The entertainment center is next to one of the proposed hotels [see panel left]. That hotel is proposed to be three stories. It appears  be built on part of the parking area now used for the Tuk Tuk Thai restaurant. "The central area has the the hotel with some retail space...It’s got playgrounds."
Town West is enthusiastic about what can be done with the area
"...Sandy bars may be associated with the hotel restaurant area. All the fun places for you to come and bring kids and grandkids or nieces and nephews or grab somebody else’s kids (I’m sure the mother would appreciate a break) and bring them out here and have some fun in the southern area.
We worked with the town on a true park area, playing... throwing around a basketball and football. In some of these areas you can do lot of art stuff that we’ve seen a happening in the parking lot at the Oro Valley Marketplace over the years.
This would give a much more purposeful space with restaurants and other things associated with it."
- - -

Email ThisBlogThis!Share to TwitterShare to FacebookShare to Pinterest
Labels: Oro Valley Marketplace, Oro Valley Village Center, Planning and Zoning Commission, Town Staff, Town West Realty
Newer Post Older Post Home
Our Weather
Oro Valley Quick Facts
• Population: 47.070
• Population per square mile: 1,154
• Median Household Income: $83,341
• Median Home Value: $311,800
• Median Gross Rent: $1,237
• Persons over 65: 31.8%
• Persons under 18: 16.3%
• Total Area: 36 Square Miles
Source
Join Our Mailing List
Disclaimer
We are not responsible for the guest views or comments of others.
Disclaimer of Email
The email address, "letorovalleyexcel@gmail.com" is not ours. The individual using that email identifies as "Richard Cranuim." This individual and this email address are not affiliated with LOVE in any way. We have blocked the address from our mail program and would suggest you do the same.