Vella: New standard fixes problems
Last week, the The Oro Valley Town Council approved (6-1 vote) parking lot requirements for commercial properties.  According to Oro Valley Planning and Zoning Administrator Bayer Vella, the town will no longer see parking problems like is seen today at The Landing, Noble Hops, and Dutch Brothers under these new standards. Indeed, according to Vella, his team considered these situations in crafting the new requirements.
According to Vella;" “We’ve right sized our standards, modernized our standards, improved design standards and increased simplicity of understanding and enforcement. 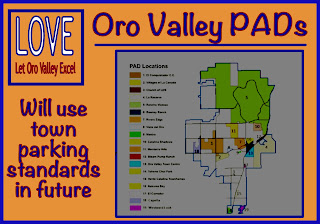 Standards apply to the entire community
Included in the new standards is the provision that these standards apply to all areas of town. Thus, those planned areas (PADs) will no longer have their own standards. The town notified the homeowners associations of these PADs [panel right] regarding this change. It received no feedback.
Specific trash pick up hours
The standards were approved as presented by staff and as reported in LOVE last week. One change that Mayor Winfield noted, a change that the new standard now have, is specifying the hours of 6am to 7pm for trash pickup in these commercial lots. This is more specific and more easily enforced than the "dawn to dusk" standard that was in the proposal. It also matches the times used in the the town noise codes.
Applies to new situations only
The new ordinance applies to new requests and not to existing parking situations. New requests also include changes or expansion of existing lots.  Thus, the new standards would apply to the Oro Valley Village Center, since it is a change in existing use. However, that facility currently has an alternative parking ratio that was negotiated in 2005, when The Oro Valley Marketplace was approved.
According to Vella: "Believe it or not, for all the parking spaces you see when you go our there today, they are several hundred spaces under what the PAD would require because it was developed back when the parking ratio model was different."
The updated standards go into effect in 30 days.
- - -

Email ThisBlogThis!Share to TwitterShare to FacebookShare to Pinterest
Labels: Planning and Zoning
Newer Post Older Post Home
Our Weather
Oro Valley Quick Facts
• Population: 47.070
• Population per square mile: 1,154
• Median Household Income: $83,341
• Median Home Value: $311,800
• Median Gross Rent: $1,237
• Persons over 65: 31.8%
• Persons under 18: 16.3%
• Total Area: 36 Square Miles
Source
Join Our Mailing List
Disclaimer
We are not responsible for the guest views or comments of others.
Disclaimer of Email
The email address, "letorovalleyexcel@gmail.com" is not ours. The individual using that email identifies as "Richard Cranuim." This individual and this email address are not affiliated with LOVE in any way. We have blocked the address from our mail program and would suggest you do the same.