Four More Years? Yes or No? It’s Up To You 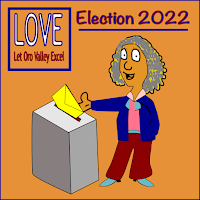 Oro Valley votes for mayor and council tomorrow
Tomorrow, Oro Valley votes on who will be their Mayor and town council.
It is a “winner take all scenario for Mayor
The mayor will either be former Police Chief Danny Sharp or Current Mayor Joe Winfield. Four years ago, Winfield won a landslide victory over then Mayor Satish Hiremath. Winfield received more than 58% of the 15,817 votes cast. Four years earlier, Hiremath won a landslide victory over his opponent, receiving more than 62% of the 11,027 votes cast. This earned him a second term as Mayor.
We’ve covered the mayoral candidates and their views during the past four weeks. Still, we think it important to hear a bit from their supporters on why they support their candidate.

Sharp supporters say Danny is the best candidate
Mary Murphy is a six year resident of Oro Valley. She is also a member or the town’s Board of Adjustment. One of the reasons she chose to live in Oro Valley was the town’s outstanding public safety record. Here’s why Mary believes that Danny Sharp would be an excellent Mayor:
Winfield supporters say that Joe is the best candidate
Jack Stinnett is a long-time resident and former Chairman of the town’s Parks and Recreation Commission. He is passionate about our community and passionate in his support of Joe Winfield. Here are his thoughts:
Don’t forget to vote for three open council seats
The Mayor does not make decisions alone. It is the town council of which he is a member, that has the final say. There are six candidates vying for the three open council seats. Here’s who they are:
These six have affiliated themselves with one of the two mayoral candidates. But you don’t have to vote for one or all of them simply because they have done that. You can “mix and match.”

We will be back Wednesday to report preliminary results
These results will likely include about 98% of the total votes cast. However, there will still be “provisional” and possibly late mail in ballots not yet counted. It could take a few more days for those.