A Neighbors Perspective: Oro Valley Church of the Nazarene wants to Rezone Residential Land for Massive Sports Complex
The Oro Valley Church of the Nazarene (OVCN) would like to rezone its campus to facilitate the development of a very large sports complex. The problem, for its neighbors, is two-fold. First, the proposed sports complex would sit on land that is currently zoned residential. Second, should the church be allowed to succeed in its attempts to rezone this land, the scale of the proposed complex is shockingly inappropriate for its surroundings. 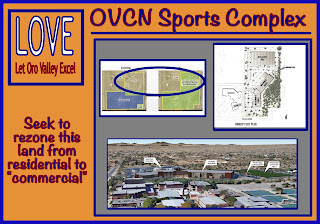 OVCN intends to construct a full-size football field with 70-foot lighting, concession stand, and a 42-foot high 75,000 square foot building to house the sports complex! By comparison, a grocery store such as a Fry’s or Safeway is about 38,000 square feet. Imagine for a moment: Two grocery stores side-by-side an a football field being built next to your backyard!
The church’s attempts to rezone residential land to accommodate this project is causing an unimaginable amount of stress on its neighbors, many of whom are senior citizens and veterans who have invested their life savings into the neighborhood and have lived in these homes for decades! Put yourself in these people’s shoes for a moment and consider what this development will mean to their quality of life: the resulting traffic, noise, light pollution, and devaluation of property are simply life-destroying.
According to its pastor, OVCN feels a calling to create a youth sports ministry. Let me be clear: Our neighborhood is not against such a calling! Our contention is simply that the church must find a way to build its youth sports ministry in a manner that is respectful to its neighbors; for example, by containing its development plans within the current zoning restrictions or by finding a new location that is already zoned appropriately for its plans.
Many local churches have acted in the spirit of Christ by respecting their neighbors and recognizing when they’ve outgrown their neighborhoods, relocating their primary campuses or opening second campuses. We look forward to witnessing OVCN follow those examples and stop threatening to ruin its neighbors lives in an effort to save itself from having to expand elsewhere.
- - -
Stephanie O’Neil is native Tucsonan and Oro Valley resident of 5 years. She holds a Bachelor’s degree in Accounting from the University of Arizona and a Master’s of International Business from University of Queensland, Australia. Formerly a Raytheon employee, she is currently a stay-at-home mother of two young children.