Guest View-Josh Nicolson: We Will Get The Marketplace Right

Probably my favorite thing about doing this job is getting out and talking to people. I am always drawn to a good conversation with a citizen, and this election season I have talked to hundreds of Oro Valley residents.

One thing keeps coming up… they want to know about the Marketplace, and few are in support of the five and six story apartments in our scenic corridor that were proposed by Town West and HSL Properties. My opponents all support this original proposal for 75 foot, downtown style apartments.

No doubt my opponents will approve tall buildings in the Marketplace
I got asked the other day: If those running against us win the election, can the developer can still get high rise apartments. The answer is: Yes!  This issue hasn’t been resolved and will be on the table until the area is developed.

I told Town West that four and five story buildings would not “fly” in the Marketplace
When Town West and HSL purchased the marketplace, they met with council members and Town staff. At the time, they were presenting two and three story garden-style apartments along Tangerine, and a four and five story apartment along Oracle Rd.

I told them they had some good concepts, but that five story apartment just wasn’t going to fly in Oro Valley.
Yet… they submitted that plan anyway!
A couple of years later when they filed the application, they had five and even six story apartments at both Tangerine and Oracle Rd. Approval could set a precedent for high rise apartment buildings and exceptions to General Plan designated scenic corridor requirements. These are the five and six story apartments the developer was proposing.


These buildings would be “really, really high”, blocking our scenic views
Council members were taken on a site tour, and apparently the applicant had run out of helium before placing balloons at the corner closest to Oracle where the view would be most blocked. I grabbed a balloon from another location and tramped through the brush to get it set up correctly to be able to see the correct height impact. Due to the flexible nature of the balloons and wind, the balloons lean at an angle. We ended up getting the police department to bring out drones to show us how tall the buildings really were. 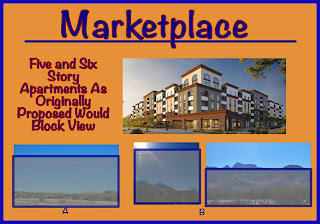 The shaded area shows you the view blockage
These pictures [panel right] show you just how much the view would be blocked from Tangerine Road and the multi-use path next to it:

A. This picture shows the view to the West, and just how much higher the drone (actual building) would be than the balloons.

B. These pictures are from near the multi-use paths near the Marketplace. You can see how high the balloons are from that angle, as well as the drone higher up.

The latest plan is workable. It is “community friendly”
In the end, the council members whose campaigns weren’t funded by Town West and HSL were able to negotiate for the citizens and asked for a plan that would be within existing heights and setback limitations to preserve the scenic view.
A plan is pending that would allow for two and three story garden style apartments, and a small amount of height allowance for two 49’ hotels that would follow scenic corridor setback requirements.
We will always fight for you
If you feel, as I do, that this would be a better fit for Oro Valley, please be sure to re-elect your Mayor and Council to represent you.
Josh Nicolson
Oro Valley Council Member and Council Candidate
- - -
Note: LOVE added the subheadings for reader convenience