Council to review and approve budget detail tonight
The Oro Valley Town Council approved a budget limitation of approximately $148 million for fiscal year 2023 at its June 1 meeting. That set the maximum amount that the budget can be for this year. Tonight, after a public hearing on the budget, the council will discuss and likely approve, as is, the town manager’s recommended spending for fiscal 2023.
The only change in the budget since the June 1 meeting is a $2.1 million transfer of funds from the Community Center Fund to the General Fund to pay for golf course irrigation replacement. This leaves a planned balance of $1million in the Community Center Fund.
Budget is “heavy” on capital spending 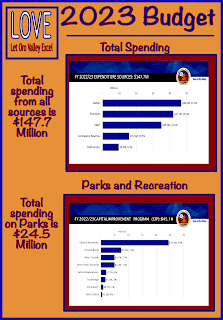 About one third of all planned spending is on capital items. However, its actually larger than that, about 40%, when contingency reserves (unknown spending) and debt service are excluded. Over half of that amount is being spent on the buildout of Naranja Park and Golf Course irrigation. The funding source of most of this spending is the Parks Bond the town issued last September. The issuance of the bond reflects the majority council’s abandonment of the town’s forever policy of “pay as you go” spending for its parks facilities.
According to a town staff draft presentation, tonight’s approval of the budget will also approve what is called the “Ten Year Capital Improvement Program.” However, this is not true.
“The 10-year capital plan serves as a placeholder for future capital investments and is used each year to develop essentially “year 1” of the plan annually.” (Source: Staff reply to council member questions, May 2022, page 6)
The vote of any council on a budget only approves the spending for that year and not for future years. This is an important distinction because future councils may have far different spending priorities than current councils.
Staff vetted budget over a two month timeframe
Town staff has vetted the budget using a methodical process:
Thus, we expect no changes of any substance tonight.
- - -
Note: The budget was unanimously approved by the council.