Oro Valley Village Center Developer Town West is a "member" of a close community of investors and developers known to Oro Valley
Town West Realty is proposing the "reimagining" of the Oro Valley Marketplace. Town West operates other facilities and centers in town including the Del Oro shopping center. That is located on the north east corner of Oracle and Orange Grove. Town West specializes in revitalizing facilities. Town West contributed $6,500 to Council Member Solomon's 2018 election campaign.

Town West Realty is also involved in a partnership with HSL Properties and Iridius Capital. Together, they purchased the La Encantada Mall in September for $165 million. Town West Realty will manage the mall.
Iridius Capital invests in Avilla Homes. NexMetro, a Phoenix Based company with national reach, is seeking a rezoning of two commercial properties in Oro Valley to residential use in the area of Tangerine and Rancho Vistoso Blvd.

HSL Properties sold  the town 45-holes of golf and what was a clubhouse, now the community center, to the town in 2015. Currently, they operate the El Conquistador Resort and apartment facilities in Oro Valley. The principals of HSL were also the major contributors to the campaigns of the former council majority, the same majority that approved the purchase. Love has published many articles regarding their involvement in Oro Valley. They contributed $12,000 to the campaigns of Rodman, Solomon, and Greene in 2020. 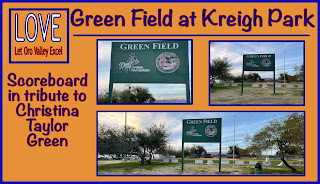 Remembering Christina Taylor Green
Christina Taylor Green is a nine year old who was murdered in the assassination attempt on Congresswoman Giffords on January 8, 2011. It was a Saturday. It was morning. It was at Safeway at Ina and Oracle. Christina had gone there to meet one of her heroes, Giffords.  A noble idea that met with tragic timing.
"The only girl on her Canyon del Oro Little League baseball team The Pirates. Christina-Taylor played second base and wanted to be the first woman to play in the Major Leagues. She came from a family of baseball players. Her grandfather, former major-league pitcher Dallas Green, was team manager for the Philadelphia Phillies when they won the World Series in 1980. Her father, John Green, is a scout for the Los Angeles Dodgers." (Source)
The baseball field on which she played is next to the Kreigh Park play area. Appropriately, it is called "Green Field." The scoreboard was dedicated by the Los Angeles Dodgers "Dream Foundation.". The scoreboard is in need of a bit of work, as seen in this photo.
Town's Water Wasting Continues
The Town of Oro Valley, winner of last years LOVE water waster award, finished the year strong, wasting more than 36,249,000 gallons or 111.19 acre feet in calendar 2021. That's enough water to supply 432 typical Oro Valley homes for a year.

Email ThisBlogThis!Share to TwitterShare to FacebookShare to Pinterest
Labels: Avilla Homes, Christina Taylor Green, Green Field, HSL, Iridius Capital, NexMetro, Oro Valley Marketplace, Oro Valley Village Center, Town West Realty
Newer Post Older Post Home
Our Weather
Oro Valley Quick Facts
• Population: 47.070
• Population per square mile: 1,154
• Median Household Income: $83,341
• Median Home Value: $311,800
• Median Gross Rent: $1,237
• Persons over 65: 31.8%
• Persons under 18: 16.3%
• Total Area: 36 Square Miles
Source
Join Our Mailing List
Disclaimer
We are not responsible for the guest views or comments of others.
Disclaimer of Email
The email address, "letorovalleyexcel@gmail.com" is not ours. The individual using that email identifies as "Richard Cranuim." This individual and this email address are not affiliated with LOVE in any way. We have blocked the address from our mail program and would suggest you do the same.