Three major sets of bond projects... Naranja buildout is the most challenging
The buildout of Naranja Park is the most challenging of the three sets of bond projects that the town will undertake, This is because it is the most complicated and the most time consuming.
According to town Public Works Director, Paul Keesler, a three year time horizon for Naranja Park build out is not possible if the town uses the normal “Design-bid-build“ approach to building facilities. The town plans to use the “Design-bid-build“ approach for the Community Center Improvements and Multi-use Path Connection projects.
The "Design-bid-build“ process is time consuming. First, a conceptual design is created; then a project design is prepared; next, a request for quotation to build is solicited. A bidder's conference occurs. Bids are obtained. A contractor is selected for negotiation. Negotiations occur. Finally, after many months of effort, a contract is signed after terms have been agreed upon by the town and the contractor.
Using a "Design-Build-Design" approach for Naranja Park
The town will use a different process for the Naranja Park build out. This is because there are many parts to the Naranja Park build out and only three years to get at least 85% of the work done.  Instead the Town is going to use a “construction management at risk” (CMAR) approach. The town used this approach in building the town’s aquatic center.
Addressing town council at as study session on November 3, Keesler described the CMAR approach: "We hire a designer at the onset of the project; also hire a contractor based on qualifications...They work as a team 'designing, constructing, designing and constructing' so that we get to start a whole lot sooner." 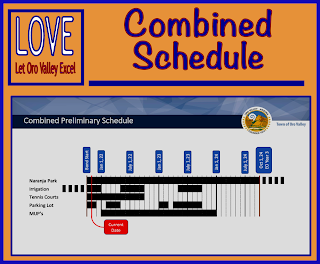 “We’re well on our way, but we have a lot going on in the next three years.”
Keesler presented a three year schedule for these project. Some work has already started.
Naranja Park built out schedule
Regarding Naranja Park, the town has hired an individual to be the construction manager. The individual has experience in CMAR projects. The town has hired McGann and Associates as the designer firm. The town will select the CMAR contractor by the end of this year. The plan for Naranja Park is to start the three plus year project next May and to keep the park open throughout the three year build out.
Golf course irrigation replacement schedule
The timetable for the golf course irrigation project is dictated by the golfing season. Summer is the lowest use period. Next summer the town will complete the irrigation for the El Conquistador Course. It will complete the irrigation for the Canada Course in the summer of 2023. The town has already bid this work and the council approved a contract of $7.8 million at the November 3 council meeting.
Multi-use path connection project schedule
The three multi-use path projects will be one over the three year period. The path connecting the CDO Multi-Use path to Kreigh Park will be the last of the three path projects because the town has no idea, at the moment if what will be the route of the path.
- - - 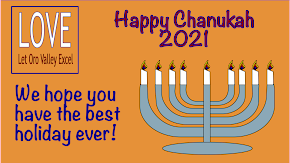