Guest View-Art Segal: A View of Oro Valley From A Distance

Art Segal was a LOVE Cofounder. He worked tirelessly on LOVE from 2007 until 2016.  LOVE is the product of many people. Not just me, the publisher. I want to recognize and thank them all.  LOVE really is: “Of the people, by the people, and for the people.
—-
Hi Everybody,
Hopefully, there are still some Oro Valley folks that may remember me. I'm Art Segal, a former resident who, along with my wife Martha, left our beautiful home in La Reserve to relocate to SW Florida in 2016. Time seems to go by so quickly, and we have vivid recollections of moving into our new home in Oro Valley in 1993. At the time, Oro Valley's population was approximately 14,000.
After 23 years of mostly good times, in July of 2016, we decided to leave our friends and acquaintances and the home we really loved. Some may ask, "if you loved the home and area so much, why would you leave?" That's certainly a fair question, and l'll try to answer it truthfully, and straight forward. It had nothing to do with the glorious weather, or the fact that the population grew to be in excess of 44,000. 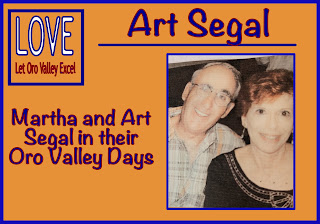 What made us leave was seeing from a close up view what was happening to our community. I wasn't a "political person," but as a result of the local politics in Oro Valley, back around 2007 (if my memory is accurate), Richard Furash and I started a blog we called "The LOVE BLOG"-----an acronym for "Let Oro Valley Excel." Our sole purpose was to give a voice to the people of Oro Valley, as---- our opinion, the big developers and the elites were running the town----and getting away with it. We tried----mostly unsuccessfully to get candidates that were "people first" candidates elected as mayor and council members. Unfortunately, the big money financially supported "their" candidates, and for the most part, due to many uninformed folks that were apathetic, things kept getting worse.

Some of the examples that made our decision to leave were the subsidies given to the big developer out of Phoenix, Vestar to develop the prime land on the corner of Oracle Road and Tangerine. We understand that once the subsidies ended after 10 years Vestar sold the property that was to be a "unique and upscale" shopping center, to another big developer. The site hardly became what was promised, and what it will become next----I don't know. Another example of the big developers "running the show"-- that was the final negative for our community and for me, was the purchase by the then mayor and council of the El Conquistador golf courses and other amenities. I can't tell you how much that decision cost the Oro Valley tax payers, but it was excessive.

So, that's a relatively short history of why we no longer are a resident of such a beautiful location. Now, to the main point. I don't how many of the folks living in Oro Valley appreciate the time and effort that Richard Furash has given to the community for so many years. While I tried my best, but ultimately gave up, Dick has persevered and for the most part, has been a singular voice of reason in his attempt to Let Oro Valley Excel.

There's still much to accomplish, but hopefully, enough Oro Valley residents will elect only those candidates that are for the people. Thank you Richard for your yeoman effort, that should make you very proud.

My best to you, your family and the residents of Oro Valley.