Failure to act started last May
The Town of Oro Valley knew in April that HSL Conquistador was not going to take over operation of the Pusch Ridge 9-hole golf course. Yet, it continued to move forward with closing the facility despite knowing that it was never the intent of the the council to leave their neighbors who live on or near the course in jeopardy.
The intent of the Town Council was never to close the course... It was to lease the course to the El Conquistador
On February 18, 2020 The Oro Valley Town Council unanimously approved a Memorandum of Understanding (“MOU”) with HSL El Conquistador and HSL Financial Management for the takeover of the Pusch Ridge Course. HSL was to lease the facility from the town, exercising a “discontinued golf” clause in the original 2015 purchase and sale agreement when the town purchased the Community Center, Golf, and Tennis. That Memorandum of Understanding stated that the town was going to discontinue operating the nine hole Pusch Ridge Course on October 1, 2020. The lease agreement was to come before council in the future. 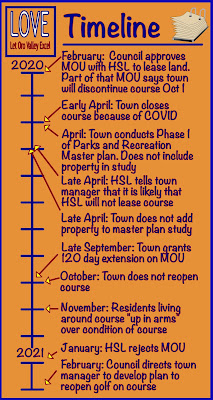 Town Attorney Cohen assured the Town Council that HSL was going to take over operations. All that was left was the negotiation of a lease.
The MOU was negotiated by Town Attorney, Gary Cohen and Town Manager, Mary Jacobs.
According to Cohen “HSL is telling us, right now, that they are going to lease this course and that it will be effective October 1.” (Time stamp: 2:04:14 of 2-28-20 Oro Valley Town Council Meeting).
In late April, HSL told Town Manager Jacobs that they were not likely to lease the course
Town Manager Jacobs explained at the February 17 meeting that HSL indicated that they did not have the financial resources to do so.
Jacobs noted that “They were aware that operating the golf course would require a subsidy.”  In other words, HSL did a workup of the financial prospects and decided not to do lease the property, just as they had decided to get rid of it when they sold it to the town in 2015.
It may even be possible that HSL has bigger plans in mind for that property (Please do use your imagination).
HSL has no pressing need for the course itself. The El Conquistador Resort no longer needs a golf course in order to be rated "five star." It now has a spa that qualifies them for this rating.
The town neglected the golf course, closed it, despite knowing that HSL was not going to take it over
The Town closed the course in April due to Covid. Then, the Town eliminated over-seeding and watering the course. The fairways were brown. Residents who live along the course were "up in arms." They launched an effort to get the grass green again and succeeded Wednesday night. As we reported last Thursday, the Town will consider a detailed plan to operate the course starting in November.
Town Manager Jacobs did not act early... created the crisis... dumped it on Council
Town Manager Jacobs did not act to immediately include this property in the Parks and Recreation Needs Assessment that she commissioned. She should have done this in May when she knew HSL was not really interested in assuming operation of the golf course. But even if they were interested, the land should have been included in the Needs Assessment and Master Plan. Then, if HSL failed to lease the land, its use could be considered in the larger context of the town - not a one-off decision as is now the case.
It is likely that the council did not know of HSL's lack of interest until September 23. This is when they extended the agreement with HSL for 120 days.  The Town Council, like the rest of us, were "in the dark."
Jacobs' inaction disappointing. She is a strategic thinker.  Is it possible that she did not know that HSL was simply "playing the Town" because HSL is always "playing the Town?"
All the signs were there.
They even told her they weren't interested.
The town is where it is today on this because of her inaction.
---