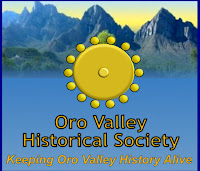 This is the first in a series of articles written by The Oro Valley Historical Society. Future OVHS articles will appear on LOVE every other Thursday.

Happy Birthday, Arizona!
On February 14, 1912 the Arizona Territory was finally admitted to the Union as the 48th state. The road to statehood began in 1863. In that year on February 24th, President Lincoln signed the Organic Act dividing Arizona into a territory separate from New Mexico. The efforts for statehood took shape in earnest in 1904 when to the dismay of Arizona, Congress attached an amendment to the statehood bill calling for Arizona and New Mexico to be admitted as one state. In 1905, the Arizona (Territorial) Legislature passed a resolution objecting to joint statehood. It read in part:

“We believe that such is without precedent in American history. It threatens to fasten upon us a government that would be neither by, nor for the people of Arizona. It would be a government without the consent of the governed. It humiliates our pride, violates our tradition and would subject us to the domination of another commonwealth of different traditions, customs and aspirations...” 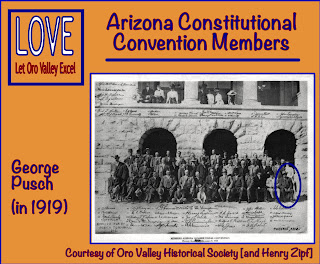 Bills in the U. S. Congress were written, amended and rejected several times before both political parties included platform statements favoring separate statehood for Arizona and New Mexico. Finally, a bill was passed in 1908 allowing Arizona to hold elections for delegates to a constitutional convention.

The Oro Valley Connection
In 1910, cattle rancher and businessman, George Pusch, was elected as one of the 5 constitutional convention delegates from Pima County. George, an immigrant from Germany, had already set up successful businesses in Tucson (ice storage and a butcher shop) as well as Steam Pump Ranch. (Steam Pump Ranch is on the National Register of Historic Places and is located in Oro Valley at 10,901 Oracle Road). He was a member of the 1891 and 1899 Territorial Legislature and was also on the Tucson City Council.

“The 1910 Constitutional Convention lasted 60 days. The Democrats wrote a constitution that contained measures for the recall of all public officials, including judges, who were often viewed as being controlled by large companies and the railroads. They anticipated that Congress would approve it. The Convention Republicans disagreed with the proposed state constitution and all except one refused to sign it. George Pusch and the other Pima County delegates went home, so Pima County had no signatures on the state constitution document sent to Congress for ratification.” (Source: Patricia Spoerl, Oro Valley Historical Society Heritage Guide: George Pusch and Arizona Statehood).

The original state constitution reached President Taft’s desk after passing both houses of Congress, but Taft (like the Pima County delegates) vetoed it due to the inclusion of the recall proviso. Arizona relented by taking it out. Again, it passed both houses of Congress and Taft signed the proclamation granting Arizona statehood on February 14, 1912. Incidentally, Arizonans were hoping for Taft’s signature on February 12th, Lincoln’s birthday, but instead Taft signed it on Valentine’s Day. (Later that year the Arizona constitution was amended to allow for the recall of judges!)

Interested in local history?
Stop by Steam Pump Ranch on the second and fourth Saturdays in February, March and April. The Oro Valley Historical Society presents docent-guided tours from 10 a.m. to Noon. No reservations are required for the 50-minute tour that leaves on the hour and every fifteen minutes thereafter. Tours leave from the OVHS tent that is located just south of the Farmer’s Market ramada. Suggested donation is $5 to assist in the cost of our displays and exhibits and ongoing programs. We hope to see you!
---
Resources for article:
Oro Valley Historical Society Heritage Guide, Patricia Spoerl
Claiming the Desert, James A. Williams
Arizona: An Illustrated History, Patrick Lavin
AZ Admission to Statehood by Archa Malcom Farlow

The Oro Valley Historical Society is a 501 (c) (3) non-profit volunteer organization, whose mission is “To promote research, preservation, education, and dissemination of historical information related to the greater Oro Valley area.” We invite you to become a member or volunteer. Visit us at ovhistory.org and help keep Oro Valley history alive.