Love Exclusive: Special Interest Money Poured Into The 2015 Recall and The 2018 Primary Election

This is the second of a three part series on the influence of developer and contractor donations on Oro Valley politics. Our first article covered the special interest campaign the Hiremath epiphany years: 2010 through 2014. We follow today with a discussion of the special interest donations to the special election of 2015 and the 2018 election.
---
El Conquistador Country Club purchase causes recall election
In 2014, weeks before the primary, Mayor Hiremath had an epiphany. Suddenly, Oro Valley needed a community center and it was his top priority. The community center came with 45 holes of golf, purchased from his top campaign contributor, and the top campaign contributor to his three majority members, HSL Properties. This we reported in the first article in this series.

The purchase of the property by a 4-3 council majority vote threw the town into chaos. Residents initiated a referendum to challenge the purchase. The referendum secured ample signatures. The town clerk rejected the petitions on the basis that a wrong number was used on the top corner of the petitions. A court upheld her decision. Petitioners then initiated a recall of the Hiremath Majority.  There were ample signatures for a recall election on each of the four.  The Hiremath Majority retained their council seats.

2015 Recall Election
Who did the Hiremath Majority turn to finance the 2015 recall campaign? The same people who got them elected in 2014. This included HSL, the company that sold the golf courses to the town.

HSL contributed 44% of the $61,291 special interest money raised by the Hiremath Majority.

Add to that PAC money of $8,500, which is also special interest money. The total is almost $70,000. That's the total raised, except for a large family contribution that Hiremath received. 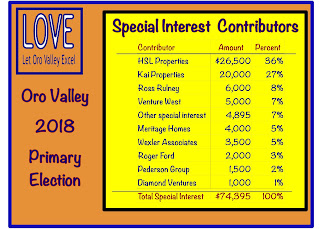 The Hiremath Majority raised more than $85,000 from individuals and $14,500 from PACs. Special interests contributed nearly $75,000. That's 87% of all individual contributions. And yes, HSL was the number one contributor.

By now, you probably see a pattern: Big money from a few contributors flowing into Oro Valley's election of the Hiremath Majority.