Council votes "No" on using $5.4 in ARPA funding to extend the reclaimed water system
Last Wednesday, the Oro Valley Town Council rejected, by a vote of 5-2, using $5.4 million in ARPA funds to bring reclaimed water to Riverfront Park and to the town's town public facilities (Kreigh Park and Pusch View Golf Course) south of the CDO Wash.
Council Member Solomon, who proposed the measure, and Council Member Green were the only two who voted in favor of it. They did so on the basis that it is "right" to save drinking water in these drought times.
Extending reclaimed water system is not on the town's list of capital improvement projects
The most common council member objection to designating the ARPA funds to extending the reclaimed water system is that the project is not a current project. Indeed, it is not even a project listed in the town's then year capital improvement plan.  As reported in LOVE, the need to eliminate the used of drinking water on town property never rose to council visibility until last June. At that time, the issue was tabled until this spring for "strategic" consideration. 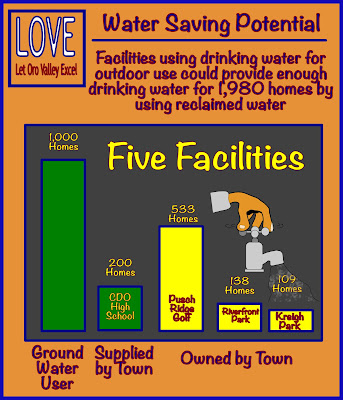 Town staff has no idea of what that project will cost and how long it will take.
According to Oro Valley Water Director Peter Abraham, town staff is in the process of determining what it will take to extend the system. Staff has developed a preferred route for the reclaimed water system extension. The challenge, according the him, is deciding how to bring the water across the CDO wash. (Our suggestion is that the town run the water lines attached under the Pusch View Bridge. This is a common practice for bring utilities across a river. It is far less expensive than crossing the wash or digging under the wash.)
Required deadline of ARPA spending a major consideration
A second concern of those who voted against the measure regards the timing of the spending. It is a federal requirement that the ARPA funds be spent by December 31, 2026.  Thus, any project to which the funds are designated must be at least in major progress by then.  As a result, Water Director Abraham would like to spend the money on existing projects. An extension of the reclaimed water system is, at best, in the planning stage. It is yet to be approved by council. Thus, it is highly unlikely that the ARPA funds could be spent on a reclaimed water system extension before the spending deadline.
For those opposed, the better ARPA funding option is the NWRRDS project... but that project has been delayed
The project they specifically identified for ARPA funding is the Northwest Recovery and Recharge District (NWRRDS) project . This project is going to bring CAP water from the northernmost CAP storage pond in Avra Valley to Oro Valley through Marana. According to town Water Director Peter Abraham, that project is currently paused because the cost estimates for continuing to build it have increased substantially. The three partners on the project (Marana, Metro Water, and Oro Valley) are seeking ways to simplify the project and reduce cost. Construction on the project won’t start again for another 18 months at most according to Director Abraham.
The result: No decision has been made on how to apply the ARPA funds
The Council continued the decision on what to do with the money to a future session.They did so because Council Member Tim Bohen wants to get a "better" understanding of what LOVE has defined as a money laundering loan scheme proposed by the town's former town manager and the town's outside accountants. This has nothing to do with how the ARPA funds are applied. It has to do with how the funds are transferred to the water department.
Use of drinking water on town outdoor facilities still needs to be addressed
The fact is: 715 homes worth of drinking water are being used every day by the town's three outdoor facilities that are south of the CDO wash. Add to this, the drinking water that is being used for outdoor watering by two non town owned facilities that are located south of the CDO wash.  Extending the reclaimed water system south to them plus some clever negotiating could provide enough water to supply almost 2,000 homes [panel above right]. That is a lot of homes.... possibly almost half the size of Rancho Vistoso.
The drinking water saving opportunity of extending the reclaimed water system south is huge.
- - -