This article was written with information provided to LOVE over the past ten months from Amy Eisenberg, Ph.D.  (Her bio appears at the end of this article).  She has been in frequent contact with town and county officials regarding an ongoing problem with Meritage Homes leaving their trash in the Silverhawke development and surrounding desert (First, Tangerine, and Palisades Road). Their discarded trash blows into the conservation area where Sonoran desert tortoises reside.
---
November 2021
Dr. Eisenberg reported extensive trash in the Silverhawke development area. Town Staff inspection confirmed her report.
Dr. Eisenberg emailed the mayor and council about Meritage Homes leaving their trash in the desert. She had already picked up hundreds of pounds of trash that Meritage Homes workers had dumped over the wall (where they were building homes) into the desert where Sonoran desert tortoises reside. She noted to law enforcement that if an individual person litters this way, they would be fined, yet “Meritage Homes continues with impunity.”

Although she was happy that Mayor Winfield had been picking up this trash during his walks in the area, she asked, “What will you do besides clean up after them as you carry a trash bag on your walks?” She stressed that this issue needs to be resolved proactively rather than after the fact. 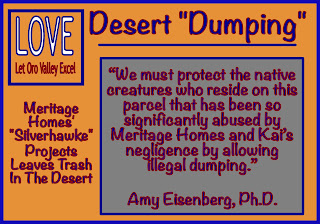 Town sends violation letter to Meritage
On November 4, 2021, a violation letter was sent from the Town to Meritage Homes after the Town Compliance Staff inspected the site on two occasions and found extensive trash both times.  The Town cited, "an accumulation of trash not being contained and drifting into the adjacent properties and within the build site on individual lots" and "As per the conditions to obtain a permit, each construction site is required to maintain cleanliness at the worksite."  Meritage was told to, "Please remove or otherwise dispose of the materials immediately" and that "failure to comply with the conditions stated in this letter is a violation of town code."  However, as of November 17, 2021, Dr. Eisenberg reported that the trash still had not been picked up.

"...the trail has been given over to the Town, which makes it adoptable for community members. The southern section of the trail was adopted by the Mayor and his wife, which is why you see them out there. The northern portion is still available for adoption."

Dr. Eisenberg contacted local media and Meritage Homes after she picked up hundreds of pounds of trash on this parcel.
On November 21, 2021, Dr. Eisenberg contacted local media and Jeff Grobstein of Meritage Homes. She informed them that she had “just returned from walking the trail by American Tower on the development parcel between Tangerine, Palisades and First” and that “Meritage Homes did not clean up this area.” She noted “unacceptable desecration” and that Jeff Grobstein was “not adequately supervising his workers.”

On November 24, 2021, she again contacted the Town and Meritage Homes noting, “Extensive trash dumped by Meritage homes along the [Silverhawke] conservation easement trail near American Tower on the parcel between Tangerine, First and Palisades” and that Meritage had already “destroyed tortoise and gila monster burrows” in this conservation area and that she and a friend had already “cleaned up hundreds of pounds of trash on this parcel.”

Later that day, she was told by the Town that their Compliance Staff was working with Meritage to ensure that litter outside of their property was being cleaned up. As you will see below, this did not happen. 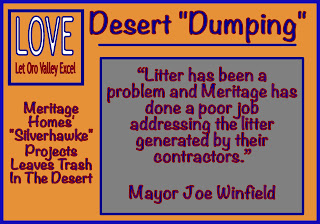 April 2022
Mayor Winfield agrees that there is a problem.
In mid-April, Dr. Eisenberg once again cleaned up several pounds of trash left by Meritage Homes, including “construction material with rusty nails along their sidewalk endangering native animals that pass through the area.” Additionally, some of this trash “had blown into the conservation zone by American Tower (between Palisades, First, and Tangerine). She reported the problem to the OVPD and the Town Council.

On April 19th, she received the following email from Mayor Winfield: (LOVE added the bold print).

“Thank you for picking up litter on the slope behind American Tower. My wife and I also picked up litter in the area you’re describing on three different mornings in the past two weeks. Litter has been a problem and Meritage has done a poor job addressing the litter generated by their contractors. We frequently walk the trails in the Silverhawke area and we have observed litter is decreasing because much of the construction is completed. I imagine once the construction phase is completed the HOA may step forward and adopt the trails. If not I’m sure someone will.”

“Meritage Homes benefited from the conservation easement, therefore they should assume the responsibility of cleaning up after themselves. This ongoing abuse is deeply disheartening. They continue to desecrate this conservation zone.”

Why hasn’t Meritage Homes been fined?
LOVE wonders: If the town agrees that Meritage Homes has done a poor job of addressing their litter problem, and this problem has been going on for months, why hasn’t Meritage Homes been fined?
Part 2 will be published tomorrow and covers the timeline from June through August 2022.
---
Dr. Eisenberg is an ethnoecologist and botanist who teaches at the University of Arizona and is an Associate Scholar with Center for World Indigenous Studies. She has authored and co-authored numerous articles on indigenous peoples’ issues, social and environmental impact assessment, and sustainable natural resource management.