There are two rezoning requests that are making their way through the town's vetting process. They are proposals to add 215 "tiny" rental homes near the intersection of Tangerine Road and Rancho Vistoso Blvd.
Avilla East would add 90 homes in a commercial area just north of the Safeway Shopping Plaza. Avilla West would add 125 homes to the west of Rancho Vistoso Blvd. The panel below shows both of these proposed developments.
The town held two Neighborhood Meetings on the East Project. Tomorrow the town will host the second Neighborhood Meeting on the West Project.
Both projects are listed on the town's web sites as "rezoning requests" from commercial property (C-1) to high density residential. The projects are not also being proposed as general plan amendments or amendments to the Rancho Vistoso Planned Area. They should be because the 2016 General Plan has these lots designated as commercial. The use of this land for residential purpose requires a general plan amendment.
"Big Dollars" at stake
It is obvious why the project makes sense to the applicant. It will put the properties into a revenue generating position. The very high density residential use of the property will guarantee a sustainable revenue stream for years to come. 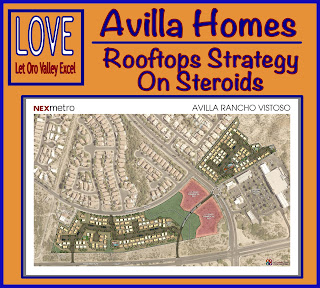 Unanimous resident objection to project
It is obvious why residents don't want to see the properties developed.  The land is currently zoned for commercial use. The applicant does not believe that anything commercial will be built on it. According to the applicant, the land will remain "open desert" for years.
When the applicant's representative Paul Oland of Paradigm Land Design discusses the land use he refers only to retail store use.
The current land use could be used for a host of non retail store purposes within the current commercial land designation. For example, there could be an office building, medical offices, or a school on the property.
The hook: Town Staff thinks that the projects will alleviate an existing traffic problem... One they have wanted to fix forever!
The "hook" is that the Town Engineer Paul Keesler, though not endorsing the project, believes that its creation will be a solution to a current accident prone situation in the area.
As seen in the panel below left, the project will use a portion of the applicant's land to create a more favorable traffic flow. Speaking at the August 28 second neighborhood meeting on the East Project: "I endorse the design as better [for safety and level of service] than is there now."
According to Keesler: "We modeled it for working flow and it decreases wait time." There is no solution without the use of private land. Here's why... 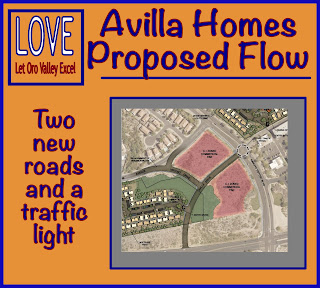 Two new roads and a traffic light
The projects would create two new roads. Both involve Woodburne Ave. Traffic heading east on Woodburne would be able to travel west on Tangerine without having to access Rancho Vistoso Blvd. Woodburne travelers would also be able to more easily access the Safeway Shopping Center.
The plan uses the alleyway north of the center as the major access into the Safeway Plaza.
The two new roads are being built on the developer's land.
Lots of reasons residents don't want this
Residents believe that there are many reasons why these projects are a bad idea:
Time for you to be involved
This is a major intersection used by many in our community. It's the first impression people will get as they visit a premier area of our community. If you travel though it, this project will impact you. On broader perspective, do you want Oro Valley to set a precedent with very high density housing? Weigh in tomorrow or at future meetings as they develop.