Town Council voted in January to open a golf course that uses drinking water for irrigation
In January, The Oro Valley Town Council voted 6-1, Bohen voting “no”, to open the 9-hole Pusch Ridge Golf Course. This course uses drinking water for irrigation. They did so because residents who live adjacent to the course were unhappy that the course was brown.
At a time when the west is suffering in a 21-year drought
At no time during the discussion of the course reopening did any council member discuss the negative impression that the use of drinking water during a 21 year prolonged Western US states drought presented. Indeed, they relied on statements by the town’s water director that the town has “plenty of water.”  Nor did the council consider spending approximately $4million to bring reclaimed water to the course, a move that may well have involved getting the Oro Valley Country Club to get off its use drinking water. That would have been a double win! 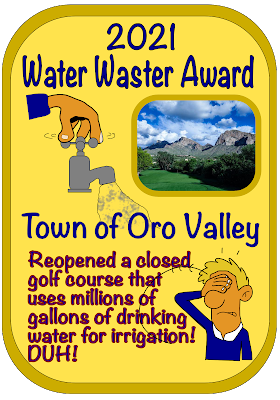 At a time when the council is considering penalizing water wasting
In June, the council discussed tightening penalties for “water wasting”. This is needed because the town has reached the end of what water conservation can provide in terms of water use savings. The town has seen an increase in total water use in the past three years, after a decade of total water use decline.
Golf course used 571 household worth of drinking water June!
Since January, the Pusch Ridge course has used 8.8 million gallons of drinking water. That’s a total of 27.1 acre feet. The town used 4 million gallons of drinking water in June. That’s equivalent to the average amount used by 571 households.
Congratulations on a job badly done
There is no doubt that the biggest water waster in Oro Valley is the Town of Oro Valley. The current council has earned LOVE’s 2021 Water Water Award.

Congratulation on a job badly done.

Email ThisBlogThis!Share to TwitterShare to FacebookShare to Pinterest
Labels: Oro Valley Water, Pusch Ridge Course
Newer Post Older Post Home
Our Weather
Oro Valley Quick Facts
• Population: 46,044
• Population per square mile: 1,154
• Median Household Income: $83,341
• Median Home Value: $311,800
• Median Gross Rent: $1,237
• Persons over 65: 33.9%
• Persons under 18: 17.4%
• Total Area: 36 Square Miles
Source
Join Our Mailing List
Disclaimer
We are not responsible for the guest views or comments of others.
Disclaimer of Email
The email address, "letorovalleyexcel@gmail.com" is not ours. The individual using that email identifies as "Richard Cranuim." This individual and this email address are not affiliated with LOVE in any way. We have blocked the address from our mail program and would suggest you do the same.