$134 Million in total spending
Town manager Mary Jacobs introduced her “2021-22 Town Manager Recommended Budget” to the town’s budget and finance commission last week. The budget calls for spending of $134.5 million. $27 million of this is for a non-recurring special payment to the State’s Public Safety Pension System (“PSPRS”) to pay down the town’s unfunded pension obligation. She was directed by council to put this item in the budget.
Will be impacted by council decisions on items in May
According to Oro Valley Finance Director David Gebhart, the budget is tentative because the council is deliberating on key issues that may affect the budget. One of these was the annexation of the Westward Look Resort. This happened last week, after the tentative budget was prepared. Other items include the impact of the possible inclusion of the former Vistoso Golf Course land in the town’s parks system; the impact of the possible approval of the Parks and Recreation Study that calls for almost $28 million in spending; and the possible broadening of use of the half-percent golf/community center sales tax. 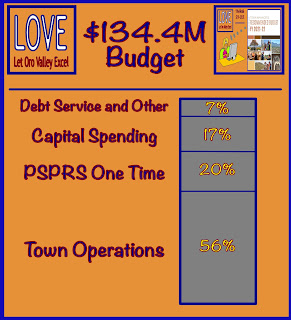 Budget includes federal “bail out” funds
One item included in the budget is approximately $5 million the town will be receiving next year from a recently approved federal “bail out” program. This allows the town to ‘free up’ funds for other uses. For example, the federal money can be used to pay for town operations, freeing the same amount for use in paying a portion of the PSPRS payment.
Operating spending of $76 million
Expenditures for town operations are $75.5 million. This is $8 million more than projected spending this year. 79% of this is from four areas: The Water, Police, and Public Works departments; and the Community Center. The Water Department generates revenue to cover its cost. The Community Center generates revenue that covers some of its costs. 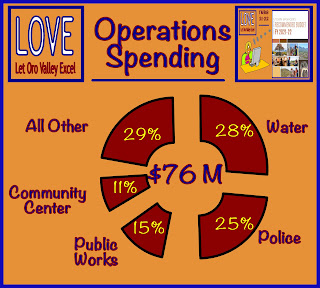 398 full time equivalent employees
Four departments house 70% of all town employees: Police Department, Public Works, Parks (not including the golf course/community center) and the Water Department. Total number of full time equivalent positions are about the same as this year.
Capital Spending: $22.8 Million
Recommended capital spending is $22.8 M. This is part of a council plan to spend $92.4m over the next 10 years. Major projects include water’s northwest water recovery program ($4.4m), golf course irrigation ($2.7m), the town’s pavement preservation program ($1.6m) and implementation of the yet to be determined parks master plan amenities ($1.5m).
Next Step: Study Session Next Week
The council will hold a study session on the budget on May 5 and 6. It is open to the public via Zoom.