Who remembers the letter to the Council from the Town Manager dated September 4, 2019?
Yes, this is a loaded question because I seriously doubt if any of the council members would remember it since it was communicated almost six months ago. Additionally, neither Council members Greene nor Bohen were on Council when the above communication was written.

However, this is an important document because it offers the Town Manager’s forecast with the important caveat that the Mayor stipulated -- that the 36-hole option would require no more than a $750,000 tax subsidy.

Ms. Jacobs’ report was full of prerequisites that had to be fulfilled before the maximum subsidy of $750,000 could be accomplished. One of the requirements was that “The irrigation replacement and general refurbishment of both 18-hole courses was completed.” This had not even been started and the costs for just the irrigation improvements for the Conquistador course alone are over $1 million. This money is to come from the existing Community Center Fund, when, and if, it becomes available.

The forecasted target dates
In her report Ms. Jacobs states:

Jacobs goes on to say:

“According to the pro formas attached, the $750,000 tax subsidy target is achievable by FY 21/22 and possibly sooner if revenue collections remain strong. The potential action plan and accompanying pro formas included in this memorandum more fully demonstrate the financial viability.”

You can read the entire report HERE.
Since this communication was written almost six months ago, nothing has been accomplished toward improving the courses because the money is not there. Currently available financials from the first 5 months of FY 2020/21 (July-Nov) reveal that the tax subsidy is already over $1 million.

The current formula is not working 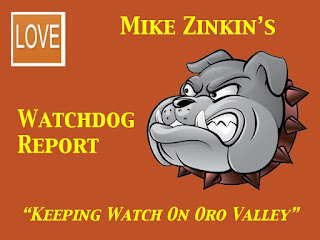 How many communications are going to be written, and forgotten, before the Council understands that the 36-hole formula is not working and will not work?
The Mayor and 3 Council members ran on a platform to do something about the golf financial drain. The meetings and abuse they took from the “Green Shirts” are over.

Although golf is up 30% nationwide due to the pandemic, losses continue for Oro Valley due to the fact that our golfing population cannot support one entity owning 36 holes. The Town could possibly support the losses with just 18 holes.

Mr. Lopez and HSL want nothing to do with golf as witnessed by their refusal to take on the 9-hole Pusch Ridge course. This is further evidence that golf does not make good business sense.

Oro Valley is made up of more neighborhoods than Canada Hills and the Villages. In fact, the vast majority of Oro Valley residents live outside those communities. What it is going to take for the council to represent the entire Town, and not just one faction?