Town Manager: Two "most viable options"
The town has two "most viable options" regarding what to do about the Pusch View 9-hole golf course. This according to a memorandum to the Oro Valley Town Council from Town Manager Mary Jacobs.
The options are: To permanently convert the 9-hole course back to natural open space for passive recreation use; or to operate etc Pusch Course during the peak season beginning next fall.
Golf is the most costly option
Over the next five years, operating the course will cost the town about $2.6 million. Allowing it to revert to natural space for recreational use will cost a minimum of $1.6 million. There is a third option the memo does not mention. The difference in cost of $1million is significant.  (See panel) 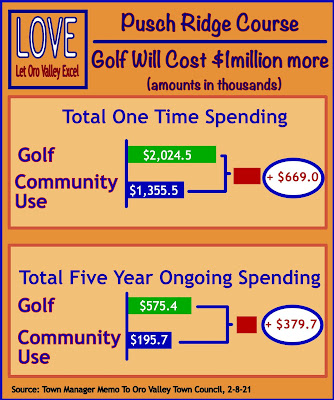 LOVE identifies Option 3: Add this decision to the Parks and Recreation Master Plan Study
The town is engaged in a lengthy process of developing a ten year parks and recreation master plan. This property should be included in that study.
There is no reason to rush a decision. HSL, the owner of the resort, can not force the town to do anything as dictated by the original contract. This is because contractual agreements usually have a "Force Majeure" clause. That clause suspends enforcement of a contractual agreement clause when there is an "act of god". The pandemic is such. Certainly, the town's purchase agreement with HSL for the property has such a clause.
We suspect that the pandemic will not be officially declared over by the federal government until mid 2022, assuming that the actual infections rate is close to zero by year end.  Then, in 2022, the town can reengage HSL, the resort owner, in a discussion of them taking back the course if that is the course of action it chooses.
As for homeowners and the homeowner associations next to the course, they can wait.... Just like the rest of us. What happens regarding this property is important to all of us.

Drinking water is a huge issue if a golf course is maintained
The course uses drinking water for irrigation  The town will have to use substantial amounts of drinking water to maintain the course. The course will use up to 45 million gallons annually. That’s equivalent to 139 acres of water covered to a depth of one foot. That’s enough water for more than 500 homes for a year!

Town admits error
"Under-billed" water to course for twenty years
In addition, the town has been billing the water at a bargain rate. The course pays on the the rate for the first tier of the water rate. That’s intended for up to 7,000 gallons per month. After that, there are two other tiers with water costing more per gallon used.

According to the memo, the town just discovered this error in billing while doing the options analysis.
“For the past 20 years, the course has continually been billed at the Tier 1 rate.’ Jacobs has no idea when it happened or how it happened. This means that the town was incorrectly billing water before the town owned the property.

The memo suggests that the town create a “turf” water rate at the tier 1 rate just to keep the cost down. If the correct rate were applied, the estimated added cost of water would be $70,000 per year. That is a yet another golf subsidy.

Creating a community natural space amenity not a “slam dunk”
To be clear, the Town of Oro Valley did not get a bargain when it purchased this course. Much of the asphalt paving is cracking, uneven or in need of replacement. The memo notes that it is estimated that 70% of the pathways need to be replaced. In addition, the memo states, and we do not agree, that there may be some short-term negative impact on neighboring property values. The memo also voices concern that there may be people from outside of Oro Valley who will want to walk the trail. This, they claim, could cause safety issues.

Council to discuss Wednesday
The council will discuss what to do with the course this Wednesday. We imagine that many residents in or near the course and their homeowner's association will attend the meeting in an effort to pressure council to make a decision that favors their interests. This approach worked last year for those who wanted the town to continue to maintain the two 18-hole courses. Both Mayor Winfield and Council Member Jones-Ivey are highly susceptible to this approach.
---