Publisher's View: Say "No" To The Kai-Capri General Plan Amendment

Once again
Tonight, the Oro Valley Town Council will consider and then vote on the proposed Kai-Capri General Plan Amendment, an amendment that will convert commercial property to residential property. The request is being justified using the same old basis: The change will bring more people to Oro Valley and, thus, will add to economic activity; and the market really does want apartments, or casitas, or small homes or whatever the developer wants to put on the property… but not that for which it is planned and zoned… commercial use. 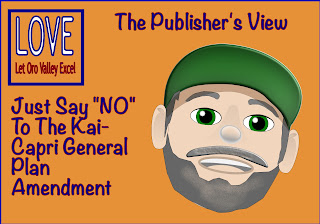 That was why former Mayor Hiremath's “rooftops strategy” failed. Instead of attracting quality employers, more rooftops lead to more traffic on Oracle Road as people commuted to work. Retailers like Dick’s Sporting Goods and Big 5 closed up shop. Empty storefronts remained empty. Many still are empty. Just look at the Oro Valley Marketplace. All this happened while town population grew 10%. No. A bigger population is not going to save stores like World Market that are going to die anyway.

Two controls residents have over what happens in Oro Valley.
One is the General Plan.
The General Plan is the vision of what residents want the town to be. The town spent hundreds of thousands of dollars to create it. Residents spent a million combined hours working on it. It took two years. It was overwhelmingly approved by the vote of the people in 2016. That plan includes a land use map that specifies how each area of the town will be used. The Kai-Capri property is designated for “commercial use.” It is ideal for commercial use. Unless there is some egregious error in this land designation, and there is not , there is no pressing need, no council imperative to turn over the will of the people.

The other is who residents elect to council
There is only one other way residents can control the future of the town. That way is by electing people to council who will uphold the general plan, protecting the wishes of the people as expressed in that plan. The residents elected those people in 2018, tossing out a Hiremath led majority that never rejected a general plan amendment. That council’s behavior was outrageous. That council approved two general plan amendments to the current general plan before the State ratified the election approval vote. To them, the general plan was merely a guide to be ignored as they wished. And they did ignore the plan countless times.

The will of the people as expressed in the general plan should over ride the will of a developer and town staff
It does not matter that town staff thinks that the plan should be approved because they think that it satisfies the five criteria for general plan amendment approval. That is their judgment. There are no hard and fast rules when it comes to the five criteria. A handful of unelected town staff members and a landowner should not be allowed to overrule the will of the people. The new majority, led by Mayor Winfield, and newly elected council person Tim Bohen, promised to uphold the general plan. We expect them to do that tonight by rejecting the Kai-Capri request. It is the right thing for them to do.
Our message to council: Just say “No”.
---