Naranja Park: A long time in coming
The Oro Valley Town Council approved a plan to develop Naranja Park on November 6, 2013.  This happened after eleven years of wrangling on the part of six town councils and hundreds of residents and non residents on what to put there.
The goal was always to build a regional park out of the 213 acre site: A former crushed rock, sand, gravel, hot-mix asphalt, and ready-mixed concrete facility owned by CalMat.  The town acquired the land in purchases in 1996 and 2000. (Source: 11-7-2017 Town of Oro Valley press release)
There had been thirteen years of thoroughly vetted and eventually rejected grandiose master plans. The amounts of $154 million and $48.6 million were bandied about to pay for what was proposed.  The voters rejected a $48.6 million bond in 2008. The idea of what to put there lay in wait. The, in 2012,  the town opened the archery range that is visible from Naranja. 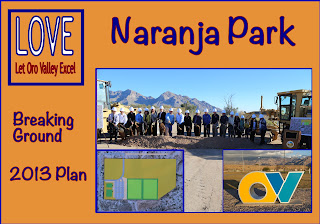 In 2013, the town council agreed to move forward with a "pay as you go" plan of $2.3 million.  The town was to bring utilities to the site and to construct: A dog park(1.1 acres) with separate areas/entrances for small and large dogs with a grass interior with dirt perimeter and a ramada in each area; two multi-sport (300' x 200' each) with turf borders and lighting; and a chip-sealed, striped and lit parking lot.
Groundbreaking was on November 27, 2014.  It was a start. Finally, an industrial eyesore was going to be something beautiful.
Then, in 2017, the town got off track again... asking residents to approve a property tax to pay for a bond of $17 million ($28 million in total cash flow) to fund ball fields at Naranja Park.  70% of the residents rejected it. Read more on that here. 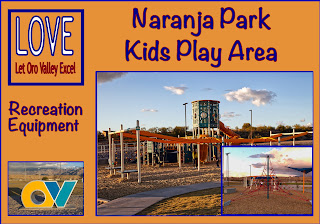 Naranja Park: Its come a long way
Today, Naranja Park has four multi-purpose (soccer) lighted fields, two dog parks, the archery range and a newly opened kids play area.  The play are features a climbing tower and rope climb (both pictured at left), zip lines, a ramada, picnic tables and seating areas.
There is also a grass centerpiece which, unfortunately, looks like it needs some work as it is quite lumpy. The town has added paved roads and pave parking lots.  It's a work in progress.
Naranja Park: Building it the right way
Naranja Park is being created over many years, involving today's generations in what will be their park, rather than being built at one time based on the wants of one specific generation.
There's a difference in results. Look at the plans in the panel that follows (click to enlarge) These are what what has been proposed over the years. 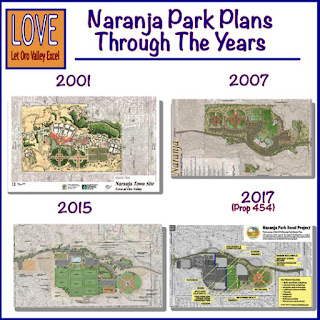 Imagine if the town built the Naranja Park that was dreamed in 2001. There would be no soccer fields. Instead, there would be baseball and softball fields, fields that are now nicely provided at Kreigh Park. There would be no dog park. There would be no archery range.
Imagine if it had built what was imagined in 2007. There would be a community center and tennis courts, both of which were opportunistically purchased by the town when it bought the El Conquistador golf courses in 2015.
The 2015 plan is different from what the town proposed in Prop 454.
And , if the town had moved in any of these directions, it would have been saddled residents with significant bond debt that would last yet another twenty years from now.  Instead, the town has taken a steadier approach, incurring no debt.
Let's hope that the town stays the course because things are shaping up nicely.
---
Visit the town site to learn more about Naranja Park.