First, the existing land use provides a key alternative commercial site and should remain such
Jones-Ivey has been looking at the property for a long time. She considered its present land use when the council made changes to encourage economic development.  “I was looking a commercial properties and cataloguing in my mind what could be possible.” The Kai-Capri property “...was right on the top of my brain, mainly because of where it was located.” She concluded that is was properly zoned for neighborhood commercial given its easy access to Oracle, via First Avenue; and access on the newly widened Tangerine Road. 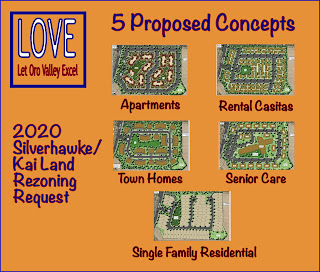 “If we are going to attract employers we are going to need some different locations for them to be able to look at.” In addition, Jones-Ivey noted, the property as zoned will be less disturbing to the habitat. “Leaving it as is just made sense.”

Second, the argument that the town needs more rooftops to support retail has not worked out over time
Jones-Ivey never thought that the amendment request, which changed over time, would come back to request housing on the property.
This presented a new challenge.
“My other issue” became the high density of the land use.” The residential options the amendment sought ranged from single family housing to apartments. (Panel above). “That just seemed to be a repeat of the previous council’s position of ‘rooftops...rooftops...rooftops'. It just didn’t seem to address the issue of bringing in additional revenues.”

During her deliberations, Jones-Ivey spoke with Oro Valley Planning Director Bayer Vella. Vella emphasized that apartments bring in additional revenues. She wondered though: What kind? Reflecting on the result of the “rooftops strategy” she concluded that significant new primary employer jobs did not happen from more rooftops. Rather, Oro Valley got more eateries. “More eateries is nothing substantial in my mind. How many eateries can we have?"
---