Parks and Recreation Study (2014)
Back in June 2014, the Town did a Parks and Recreation survey to ascertain what amenities and facilities the citizens desired in their Town. This is the survey where golf placed second to last (it placed 33 out of 34 items) only to have the Hiremath people purchase three golf courses (two 18-hole courses and one 9-hole course) just six months later.

Housing Study for Main Streets Project (2016)
When the staff-initiated Main Streets project was still alive, there was a study that told us we needed more single-family housing. That has since gone by the wayside.

Parks and Recreation Study (2020)
In early 2020, when the Vistoso golf property was still in negotiations, Jacobs had a study done to see how the property could be used for Parks and Recreation purposes. The study showed that there was no need for any new parks north of Tangerine as there were plenty of neighborhood parks. This study was a waste of money since the property was not being purchased by the Town, and the Town was not a part of the dealings. 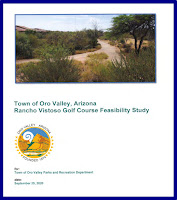 Town of Oro Valley Apartment Study (Fall 2020)
And now we have another study that tells us that we need more apartments in our Town. You can read that study HERE which includes information on how many apartments we currently have in Oro Valley, how many acres of vacant land are currently zoned for apartments, and concerns voiced by residents during public hearings.

The only valid study
We have a General plan that advises the government what the People desire. Does a “research group” know better than the People? Developers will go with the money and where the banks are lending. Oro Valley belongs to the People, not the developers, the banks, or the wishes of the staff.

Any government can hire a contractor or consultant or research group to give them the results they desire. But there is only one study that is valid because it reflects the desires of the People. It is called the GENERAL PLAN.

The town needs to stop all this government waste and look at the voter-approved General Plan for the answers that they seek.

.....
Mike Zinkin and his wife have lived in Oro Valley since 1998. He served on the Oro Valley Development Review Board from 2005-2009, the Board of Adjustment from 2011-2012, and the Town Council from 2012-2016. He was named a Fellow for the National League of Cities. He was a member of the NLC Steering Committee for Community and Economic Development and a member of the Arizona League of Cities Budget and Economic Development Committee. He was an Air Traffic Controller for 30 years. Mike has a Bachelor’s degree in history and government from the University of Arizona and a Master’s degree in Social and Philosophical Foundations of Education from California State University, Northridge.