When will our elected government come out of the shadow of Town Manager, Mary Jacobs? Have you noticed how many Executive Sessions there have been? Why are the lawyers hiding behind the cloak of an Executive Session to brief the Council? Why not do public business in public?

Here are a few examples:

The new golf management contract
The Town placed a “request for proposal” for a golf management contract. Ms. Jacobs is correct in that the Council is now out of the picture as far as the selection is concerned (that is why we have a Contract Officer). However, the Council should still be involved in the final wording and approval of the contract.

In a recent communication with the Town, I am told that “The golf management contractor is responsible for food and beverage operations, including losses it experiences.” The inception date was not included in the email so we must assume that it began on 10/1/20.

The MOU between HSL and the Town regarding the leasing of the Pusch Ridge course
The Council came out of Executive Session on September 23rd and publicly voted to continue the Memorandum of Understanding (MOU) from 10/1/20 to 1/31/21. What MOU? Has anybody seen the MOU? Shouldn’t the citizens have access to this information, especially those living adjacent to the Pusch Ridge course? 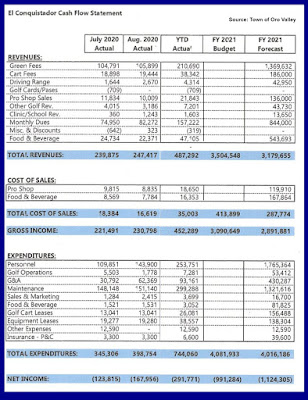 The new golf management company (Antares) has a different way of providing their numbers
Look at the financials at right. Where are the utility expenses? Are the cart fees exclusive of the trail fees that the members pay? What exactly is included in “Other Expenses” of $12,590?

There is something suspicious when comparing the golf financials from Troon vs. Antares. Troon lost $422,049 from July 1 through August 31, 2019. Antares lost only $291,711 from July 1 through August 31, 2020 despite temps of 108 degrees every day and bad air quality from the Tucson and California wildfires. This is a $130,338 dollar difference. Can Antares be that much better than Troon, whom we were originally told was “the Rolex of golf management companies”?

Covert operations
The Town Council needs to govern in public. The Town’s lawyers need to express their opinions in public. The tax-paying citizens need to see and hear what the Town Council is seeing and hearing. Government should not be a secret.
…..
Mike Zinkin and his wife have lived in Oro Valley since 1998. He served on the Oro Valley Development Review Board from 2005-2009, the Board of Adjustment from 2011-2012, and the Town Council from 2012-2016. He was named a Fellow for the National League of Cities. He was a member of the NLC Steering Committee for Community and Economic Development and a member of the Arizona League of Cities Budget and Economic Development Committee. He was an Air Traffic Controller for 30 years. Mike has a Bachelor’s degree in history and government from the University of Arizona and a Master’s degree in Social and Philosophical Foundations of Education from California State University, Northridge.