"Ready-To-Build Oro Valley"
The Oro Valley Town Council continues to consider a "ready-to-build" ordinance for Oro Valley's economic expansion zones ("EEZ") properties. The zone by far is Innovation Park (see panel below), which is owned by Venture West.  At issue is whether to allow grading of an EEZ site before site use is known (pre-graded). Once graded, the site is designated a "ready-to-build" site.

Johnston argues: "Oro Valley not in the game"
Oro Valley Economic Development Director JJ Johnston is the advocate for  the creation of ready-to-build sites in Oro Valley's economic expansion zones. Speaking passionately at last week's council meeting, Director Johnston stated that pre-graded lots are a requisite before a company will even consider Oro Valley as a location. Site selectors won't consider a site that is not ready-to-build. Thus, according to Johnston, Oro Valley loses 2-5 leads each month due to lack of ready-to-build sites, particularly sites that are 5 acres or more. 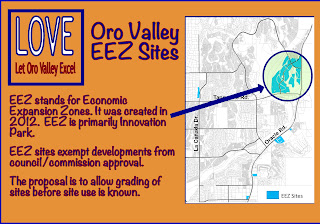 Currently, sites can not be pre-graded. Johnston estimates that a construction project takes sixteen months to complete. The proposed process will cut six months off this time frame. The six month time reduction will save companies an estimated $50 million, according to Johnston.

Founding principles of public input at issue
"Ready-to-build" sites are common in other communities. However, Oro Valley was founded on the basis that it is not simply just another community. "Oro Valley did not like the code standards set forth by Tucson or Pima County," according to Oro Valley resident and former council member Mike Zinkin. "Oro Valley desired more restrictive codes and to allow for more Citizen input to the elected officials on proposed developments."
Johnston, not EEZ Landowners, push for the change
We find it curious that EEZ landowners, and Venture West in particular, are not advocating for this change. Indeed, none have directly participated in the public hearings. We would think that they would be extolling the importance of this measure if they felt it was important to them. Yet, the are silent. Rather, it is the town, and Johnston in particular, who are advocated for the change. Johnston did mention that Venture West might grade a 25 acre site.

Blading with a twist for Oro Valley
Council deadlocked 3-3 in July on this measure. Subsequently, Johnston met with Mayor Winfield and Council Member  Jones-Ivey to visit various sites impacted by the ordinance. As a result, Johnston added three features to the recommended ordinance:
To be continued
The council voted to continue discussion of this until September 16 as Vice Mayor Barrett was not in attendance.

There is an individual who is using the email address: letorovalleyexcel@gmail.com. The individual identifies as a "Richard Cranium." This individual and this email address is in no way affiliated with LOVE. We have blocked the address from our files and would suggest that you do the same.