This is the third of a three part series on the influence of developer and contractor donations on Oro Valley politics. Our first article covered the special funding of the 2014 campaign.  Our second article discussed the special interest donations in the recall election of 2015 and in the primary election of 2018. This final article focuses on the special interest money that poured into the Rodman and Solomon candidacies in 2016.
---
The 2016 election of Bill Rodman and Steve Solomon
2016 was the only year between 2014 and 2018 in which Mayor Hiremath and his council majority were not on the ballot. There were six candidates that year. Three were incumbents. The incumbents raised a total of a few thousand dollars for that election.  Bill Rodman and Steve Solomon raised $47,600. 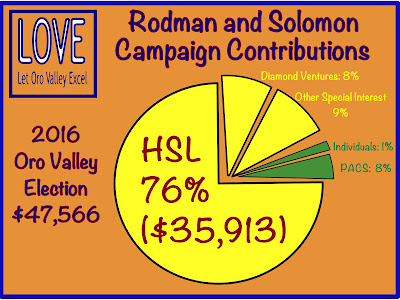 76% of Rodman and Solomon contributions were from HSL Properties
HSL Properties is the company that had so generously donated to the campaigns of Mayor Hiremath and his majority council members.

Somehow, current council members Rodman and Solomon had found the same "pot of gold" that Hiremath had uncovered in 2013; a source so rich that it literally financed all Oro Valley council majority campaigns from 2014 to 2018.

Does the past behavior predict future behavior?
Is it likely that Candidates Rodman and Solomon will raise funds from the special interest community for this election? It is, if past behavior predicts future behavior. We won't know who are their contributors until they file their campaign finance reports. One report is due at the end of this month. The other is due before the August election. Even then, we're not sure that information is accurate. Our review of the election reports revealed that information is sometimes left off of these reports, information that is reported later as amended campaign election reports.

So do stay tuned on this.

We will review and report what we learn when we learn it.
---
Source: The campaign financing information in these three articles was from the campaign finance reports filed by the candidates. There were about a hundred of these. A few of them were clear and concise. Many reports, especially those of Mayor Hiremath, were difficult to follow. Sometimes, the information on current contributions was in the wrong column; or the contributions called "campaign to date" were wrong. In some instances the "occupation" of the contributor was incorrect or their affiliated employer was wrong. We don't know nor did we ask if these reports are reviewed and audited by the town. But they should be audited and verified before being accepted.

LOVE is operating on a reduced schedule for the remainder of this summer season. Look forward to perhaps one or two postings a week.