Finish the job
Town Council candidate Tim Bohen wants to finish the job that the voters started in 2018: The job of increasing resident input on council, removing special interest control that dominated the town from 2010 to 2018.

"I am very grateful for what the challengers did in 2018. They turned over our council. They changed the direction of our town."

Bohen values Oro Valley's uniqueness
Bohen sees Oro Valley as a unique community. He wants to keep it that way. As he explains in the video at right, generic solutions don't fit Oro Valley.

Wants developments that make sense for Oro Valley
Bohen believes that the town doesn't push back enough on developer requests. According to Bohen, you have to challenge the applicant to develop a proposal that actually makes sense for Oro Valley. “You push back to get to a mutually beneficial result."

One example is the abandoned Nakoma Sky project. The land sits on the north side of the wash behind Home Depot. Bohen believes that the land use changes that enabled this project should never have been approved by council. “I'm just amazed at how we buy the Developer’s projections on the future on everything. The Council should have asked a simple question: 'Do they have the financing in place?'" Apparently Nakoma Sky did not.

Now the land is bladed and abandoned. “I look at that as a failure of the town council to not look deep enough. Either that applicant was naive or they were lying to us about it. That shouldn’t happen. Who is actually looking out for the interest of Oro Valley? Nakoma Sky never should have got going. It was clear that there was a very high risk of failure and no one asked the right question.”

The bottom line for Bohen:  “Oro Valley being a tough town to deal with is a badge of honor.”

Ready to dig in
Bohen is prepared to dig in the moment he takes office. He has been participating in town halls and viewing town meetings. He has been active in Oro Valley for years. You can read his LOVE posts here.  Knowing this, we asked him his thoughts on two Oro Valley "hot topics": 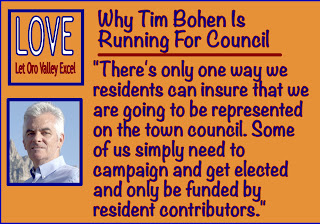 2020-21 Budget
In terms of dissecting the town manager's recommended budget, Bohen's focus is on identifying items that seem to have an eternal life.

There are items in the budget that are simply carry-over expenditures from year-to-year.  "You have to take a look at things that you thought were one off and make sure that they don’t become fixtures.”
2020 Parks and Recreation Master Plan
Bohen watched the special session on the outside consulting study. The consultant presented their findings. "I think there was far too much selling of their findings versus presenting their findings…'This is the way you should go' rather than 'here’s the data.'.  Nobody knows Oro Valley better than we do."
Vistoso Course
Bohen is following developments regarding the Vistoso Golf Course. One way or another, this thing needs to be settled for the benefit of the residents and the town. “Rompsen bought a golf course and they should have made it work as a golf course.” They closed it. “It is a less than satisfactory situation. If golf is not sustainable, then we have to come up with a sustainable solution." Bohen recognizes that there has to be closure on this. He cautions: "The progress on these things takes years.”

A "hands-on" person
On council, Bohen plans to get all the facts before making a decision. “Town council has to insist that they have the most complete and most accurate data” when making decisions. This includes data on water, development, pensions, and revenue sources, “Because town council owns the decision.”

Getting the data, sorting through it and interpreting it is going to take effort, an effort that some past council members simply did not want to make. The didn't want to get into the "weeds". Their attitude was that the town hired professionals and that council should listen to them. The defined any questioning of staff to be "meddling."

Tim Bohen's approach will be the opposite of those council members. He is a "hands on" person.  He plans to work tirelessly. He told us that when he looks back after serving on council he will be happy as long as he can say he gave the job his best effort. Somehow, we think he will do just that.
---