Police safety plan is 61% funded
The Town Of Oro Valley has provided for 61% of future projected disbursements for its police. This, according to a year-old report to the town by the Arizona Public Safety Pension Retirement System ("PSPRS"). PSPRS manages the pension. Each member, and there are 228, is responsible its pensions. In other words, Oro Valley's liability is solely the town's problem.

Underfunding is a long-standing problem
The prior council did not deal with this problem as it continued to develop over the years. The town is assessed an annual minimum contribution to the plan. With the exception of one year (2015), when the town paid an added $300,000, the minimum is what the town paid. 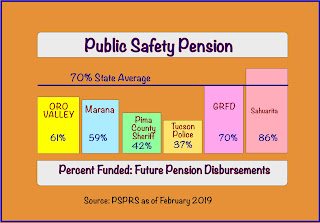 Oro Valley is mid pack
There are 228 public safety related entities in PSPRS. Only 21 have plans that are fully funded.  63% of the entities are funded at less than 70%, even though average funding coverage is 70%.  In Southern Arizona, only Sahuarita is above the average. Golder Ranch Fire District is at the state's average.

$22.9 million shortfall
How much shortfall are we talking about? $22.9 million, according to last year's PSPRS report to Oro Valley. It will likely be even more this year because the market, though performing well, did not perform at the levels the PSPRS used in creating their underfunding analysis. 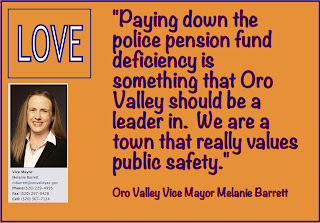 What will Oro Valley do?
There is question as to what the town should do about the shortfall. Should it behave like most communities, making the minimum payment annually?

Or should it act as Vice Mayor Barrett believes (panel left).

Visit the PSPRS web site if you want to learn more about the public safety pension plan.