Politics, Uncertainty May Nix Outside Search For Police Chief 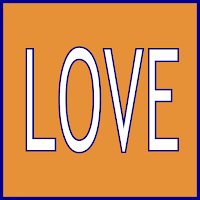 Two concurrent searches for Police Chief are in progress
In September, Town Human Resources Director Chris Brady extolled the virtues of looking "inside and out" for a Police Chief to replace retiring Police Chief Daniel Sharp. You can read Brady's remarks here.

Based on his recommendation and additional research (See Winfield Panel), the council approved doing both an internal and an external search. Three council members voted against doing an external search, even though it is a recommended best practice (See Gilman Panel). 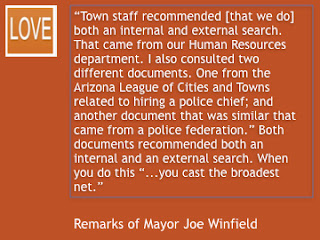 Chief Wolfe joined the department when there were 4 officers.  The headquarters was a house at 680 Calle Condordia. We recall there was a substation of sorts in Rancho Vistoso. That was a condition of Ranch Vistoso agreeing to Oro Valley annexation. We can only imagine how small that budget must have been.

Chief Sharp took over in 2000. The department has grown as has the town. Today, Oro Valley has approximately 138 officers with a budget approaching $18million.  Headquarters is in the town complex. There are several substations and a new evidence facility. During those years Oro Valley has gone from a small town of 9,000 to very large one of about 45,000 people.

Sharp and Wolfe came from outside
Both Wolfe and Sharp came to Oro Valley from the Tucson Police Department. Neither had experience with policing in our community. Neither had been Police Chief before. They brought and implemented their vision of policing to our community. Most would say the did a super job!

By 2000, the town had a developed, respected police force. There were internal candidates to become Police Chief. Still, the council at that time chose to also look outside for a new leader. Had they not done so, Chief Sharp would not have been the leader. 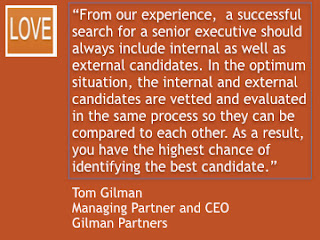 Today, there are 3 internal candidates. Chief Sharp has been introducing them to the community at various HOA meetings. They may well be the best candidates.

Add to the political uncertainty the fact that three council members did not want to do an external search. Imagine the resistance these three will mount to any external candidate. Imagine the effort the new chief will have to invest in "winning them over" if the new chief comes from outside the Oro Valley Police Department. Winning their support will be a daunting task.

A possible recall of two of the four people who voted for the external search adds job security uncertainty to the mix
The town hopes to hire the new Chief in late January. We won't know if there will be a recall election until Mid February. If the two incumbents are defeated in a May election, then the new chief, likely hired through their support, will possibly be replaced by the new Mayor and council.

It may well be that, in the end, only an insider will be willing to deal with the politics and the uncertainty.
---