Fails to seize his role to represent the views of the residents
Three Oro Valley Town Council members voted in favor of the Kai-Capri General Plan Amendment ("GPA") last week. One of them was Mayor Winfield.
That amendment would have allowed residential use on a commercial property. Last week, in a LOVE editorial, we discussed why we opposed the amendment.
Thinks area needs more residents to support local business
Mayor Winfield supported the measure because he sees a need for more residents living in the area to support the businesses there. He concluded this after touring the area with the Director of the Oro Valley Chamber of Commerce, Dave Perry.


Winfield believed that residents wanted this amendment to pass
Winfield "...was surprised by the low level of public participation. There certainly wasn’t any significant opposition to this effort as so I can only interpret that as being that there was community support. I would have liked to have seen for those that are opposing this to join us in this journey earlier in the process,” because town staff and others spent a lot of time on this.
The Mayor has his facts wrong
Our fact check revealed that opposition was expressed by residents early in the process (source). There were 23 pages of comments as of September 15. All but four speak in opposition to the plan. We also know that there were many emails in opposition that were sent to council after September 15.
Reneges on an election pledge
At the meeting, Winfield stated that the General Plan as something that can be changed. “Plans are not static. Plans are dynamic. Things change.” He believes that it was the intent of those who created the plan that details, such as land use, be determined by the GPA process. 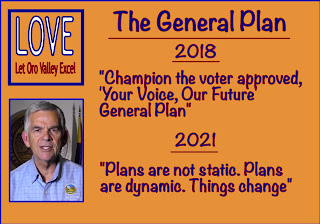 Winfield's view of the role of the General Plan is opposite of what he told us when he was running for council in 2018. Then, he said that one of his goals was to "...champion the General Plan." He also told us at that time that he was opposed to never-ending General Plan Amendments, rezoning approvals and the hyper-growth rate the town was experiencing.
Trusts that staff to uphold the General Plan
As to upholding the will of the people as shown in the General Plan: “There’s no one who upholds the General Plan more than our staff does. And I want to applaud them for making our General Plan a priority.”
You can listen to Winfield's complete remarks in the panel at above right.
---
Tomorrow, read and listen to the measured remarks of Vice Mayor Barrett as well as the remarks of Council Members Bohen and Nicolson in opposition to this GPA.