The Race Is On: Council Candidates File Petitions

The race is on
At least four Oro Valley candidates for council have filed petitions to run for one of the three open town council seats. Each has established a PAC to fund their activities. We understand that the candidates filed petitions that contained signatures well in excess of the required 468.

The next step for them is to organize their campaign and win the hearts of voters before the August 4 primary election. You will be hearing much more from them in the months ahead.

Today, we want to share with your their reaction to the process of getting on the ballot.

Candidate Tim Bohen
"As a first time candidate, the process of getting on the August primary ballot has been a great learning experience. We have met many Oro Valley residents and they have shared their concerns with us. 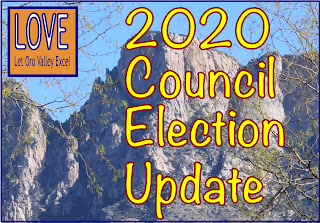 The Town Staff we have interfaced with were knowledgeable and capable of clearly explaining what is required.

I want to share with LOVE readers that the process of running for Town Council is daunting but also viable with the support of a motivated campaign team."

Candidate Bill Garner
"For myself the process was fairly easy and very smooth. I was instructed to go into the council chambers room where table and chairs were set-up for me to sit at while reviewing my paperwork. There were two clerks present with Mike Standish handling the documents and Michele Stine taking care of counting and copying.

I knew my count going into the room and told Mike in advance and the count was correct after verification or a total of 676.

I had a couple of questions and they were answered and I was given my copies with time stamps and I was on my way."

Candidate Harry "Mo" Greene
"The Town Clerk Michael Standish and his assistant Michelle Stine made the signature procurement very clear and totally understandable. Michael had prepared briefing books for anyone contemplating running for Town Council. The manuals were clear and concise.

As someone new to the political scene Mr. Standish was a tremendous help.

Using his guidance and the manual we had no missteps. My campaign volunteers fanned out and obtained the near maximum signatures in an amazingly short period of time.

The bonus of the process is being able to talk with the voters and learn about their concerns. It was truly energizing.

I am looking forward to the campaign and the election."

Other candidates: Incumbents Bill Rodman and Steve Solomon
At least one of these incumbents filed their nomination petitions as of this past Friday. We are assuming that the other will file shortly.

The race is on!