The town has borrowed to pay for golf improvements
During the recent discussions on the “pay as you go” status of the golf courses, staff presented their forecasts for the next five fiscal years. The forecast shows no debt service. In reality, however, former Mayor Hiremath and his council did borrow for this facility.

Transfers out of the CCF pay for the debt
An inquiry was made by former council member and Oro Valley resident Mike Zinkin as to whether the forecasted “transfers out” of the community center fund ("CCF") included the $120,000 transfer to the General Fund to pay back the initial $1.2 million "loan" from that fund. The answer from Town Manager Mary Jacobs was that the $120,000 was included.

A follow up communication asked about the additional $148,810 forecasted transfer out. The response was that the $148,810 was the debt service for an "Energy Efficiency Bond". That borrowing was used to pay for a new pump on the El Conquistador Course and for an HVAC for the clubhouse that is now the community center.

The bond was issued in the amount of $2million in 2016. They are payable semi-annually from now until 2032. 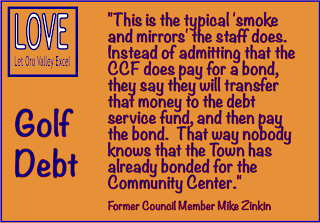 This manner of reporting the debt service buries the fact that the town has borrowed to pay for golf and community center improvements
LOVE did not previously detect this because of the way the town accounts for the debt service on this bond. Rather than show it as "debt service" in the forecast, it is shown as a  “transfer out.”

According to Town Manager Jacobs, in response to Zinkin's inquiry: “We use fund accounting references in the budget. 'Transfers Out' accurately reflects the accounting of the dollars being transferred to the Debt Service Fund, then applied to the specific expenditure as noted…. The debt service payment for the energy efficiency bonds is then accurately reported in the Debt Service Fund, as the payment is made from that fund and not the Community Center Fund.”

This is not the first time we've been confused in the manner the town is reporting financial information. Check our posting entitled: "Jacobs Presents A Tricky Budget." There we report that the town changed the way things were reported so that readers could not easily compare this past year's budget to prior years.

• The number of signatures required to recall the Mayor is 3,952 and for a Councilmember is 3,668.
• The person sponsoring the recall is town golf community member Tom Plantz (tdplantz@comcast.net)
• The recall petition number is OVREC 19-01 and OVREC 19-02 for mayor and council member respectively.
• Plantz started the recall on October 22, 2019.
• The deadline for gathering signatures is February 19, 2020.
(View Recall Petitions)